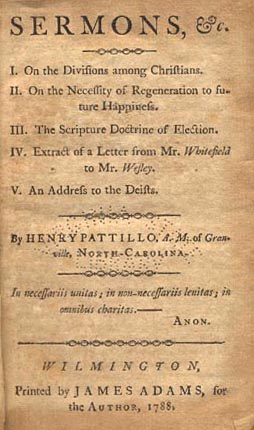 Henry Pattillo, pioneer Presbyterian minister, educator, and Patriot in North Carolina, was born in Balermic, Scotland, the son of George and Jane Pattillo. He had two brothers, George and William, and several sisters whose names are unknown. Except that young Henry was educated by his deeply religious parents to a degree above most of his Scottish contemporaries, nothing more is known about his youth until he arrived in Virginia with his brother George about 1740.

Henry Pattillo worked in a mercantile establishment until he became dissatisfied with that occupation, then became a schoolteacher. While thus engaged, he constantly felt the call to become a Christian minister and, in 1750, began planning to obtain the higher education he considered necessary for that purpose. He actually started on a journey to Philadelphia to start his theological training when he was stricken with pleurisy and was forced to remain in Virginia. During his long convalescence, the young ministerial aspirant was invited by the venerable Presbyterian educator, Samuel Davies, to reside in his home and study in his school. Pattillo intended to complete his studies at the College of New Jersey (later Princeton University), of which Davies had become the head, but he fell in love with Mary Anderson and married her in 1755. Supporting his family by teaching school in Hanover County, Va., and living with extreme economy, Pattillo continued to study with Davies until 1758, obtaining the equivalent of a college education.

In 1755 the Presbyterian Synod of New York had established the Presbytery of Hanover, and on 29 Sept. 1785 this body licensed Pattillo as a Presbyterian minister. The licentiate then began his trials required by the church for ordination. These consisted of delivering various sermons, lectures, and exegeses before the Presbytery and being examined by that body on the subjects of ontology, pneumatics, ethics, rhetoric, geography, and astronomy, and on his religious experiences. Having passed all requirements satisfactorily, Pattillo was ordained into the ministry of the Presbyterian church in September 1758.

Pattillo immediately accepted a call to become the resident minister of the congregations at Willis, the Byrd, and Buck Island churches in Virginia. He labored with these congregations for four years, then accepted a call to the Cumberland, Harris Creek, and Deep Creek churches, also in Virginia. After a stay of two years, the minister moved to Orange County, N.C., in 1765, to become the pastor of the Hawfields, Eno, and Little River churches.

In his new location, the minister not only officiated so influentially as a clergyman that he became known respectfully as "Father Pattillo," but he also began a classical school for men in his home. The success of this school inspired the teacher to continue it in Bute and Granville counties when he left the Orange churches after a nine-year ministry. The school became widely known and among its pupils were Nathaniel Rochester, Charles Pettigrew, and William Blount.

Pattillo was engaged in his pastoral work in Orange County when the War of the Regulation took place. Deploring the violent tactics of its participants, the clergyman and several of his colleagues wrote a letter to Governor William Tryon stating that they would use their influence to discourage the growth of the movement. They also sent a letter to the churches in their presbytery urging that a peaceful means be sought to settle governmental controversies. These protests were in vain but the governor remembered the effort, and when he went to Hillsborough in 1768 at the head of the militia, Pattillo was one of the clergymen requested to preach to the troops on the Sabbath.

In 1770 Pattillo joined David Caldwell, Hugh McAden, Joseph Alexander, Hezekiah Balch, and James Creswell in the organization of the Presbytery of Orange, a new division of the Presbyterian church. In 1780 he accepted the pastorate of the Granville County churches at Nutbush and Grassy Creek.

Despite the unhappy events of the Regulation, Pattillo continued his interest in the political life of the colony. Having moved to Bute County (present-day Franklin and Warren counties) after he left Orange and before he located in Granville, he was elected a county delegate to the Third Provincial Congress, which met at Hillsborough in 1775, and made chaplain of that body after it convened. He was also assigned to serve on a committee with Richard Caswell and Maurice Moore to explain to the former Regulators that the oath of loyalty Governor Tryon forced them to take under military duress was not morally binding and did not prevent them from joining the Patriots in their struggle for independence of Great Britain. In addition, Pattillo was made a member of the Provincial Council for the Halifax District. In 1771 he had been named a trustee of Queen's College, and in 1776 he became a trustee of Granville Hall. He also participated in a movement to establish Warrenton Academy.

As a testimony to his general influence, the Transylvania Company offered Pattillo a gift of 640 acres of its western land on condition that he settle on it, but he refused, though doubtless appreciated, the offer. In 1784 the minister's Granville parishioners presented him with a 300-acre farm on Spicemarrow Creek on condition that he remain their pastor permanently, and Pattillo lived there with his family until his death.

While engaged in political affairs, the clergyman did not neglect his ministry or his educational projects. In 1787 he published a treatise on Christian conduct entitled The Plain Planter's Family Assistant; Containing an Address to Husbands and Wives, Children and Servants; With Some Helps for Instruction by Catechisms; and Examples of Devotion for Families: With a Brief Paraphrase on the Lord's Prayer. In the same year Hampden-Sydney College awarded him an honorary master of arts degree in recognition of his accomplishments. He published a book of his sermons (1788), which included homilies entitled "The Divisions Among Us" and "An Address to the Deists," as well as A Geographical Catechism (1796), a textbook on geography written in question-and-answer style, the first publication of its kind in North Carolina.

No portrait of Pattillo is known. However, he was described by a contemporary as a large man with coarse features but with a commanding voice, impressive delivery, and usually a cheerful demeanor. Although his strength failed in his later years and he suffered severe financial reverses, Pattillo continued to work on behalf of Christian evangelism even in old age. In 1801 he went to Dinwiddie County, Va., to conduct a series of services and died there while thus engaged. Presumably he was buried in that area although the location of his final resting place is unknown. A commemorative service was held in the Granville churches for the departed pastor on which occasion the Reverend Drury Lacy included the following statement in his eulogy: "Thus he closed his life on a preaching tour, being far advanced in his 75th year, which doubtless does honor to his character, and should serve to stimulate all his younger brethren in the ministry to follow his example, and be willing to spend, and be spent in the cause of their Saviour, and in the cause of religion."