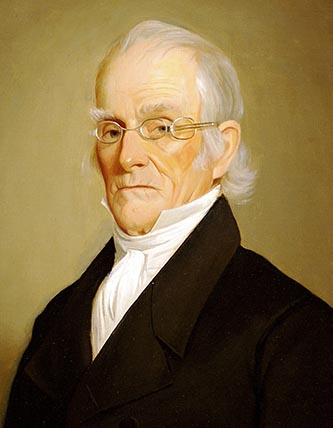 Nathaniel Rochester, revolutionary leader, merchant, and land developer, was born in Westmoreland County, Va., the son of John and Hester Thrift Rochester. His siblings were William, John, Ann, Phillis, and Esther (or Hester). The Virginia farm had been the American home of the family since 1689, when Nathaniel's forebear, Nicholas Rochester, migrated from his English home in the county of Kent. It was located near the birthplaces of both George Washington and James Monroe, and later developments in Nathaniel's career indicate a possibility that he may have been acquainted with Monroe during his boyhood.

Widowed when Nathaniel was four, his mother married Thomas Cricher, who moved the family to Granville County, N.C., in 1763. Young Rochester grew to manhood in his new home and attended the school of the Reverend Henry Pattillo, where he evidently was an apt pupil. In 1768 he obtained employment with James Monroe, a Scottish merchant in Hillsborough, the seat of Orange County, and his progress was rapid and rewarding. Within two years he was made clerk of the vestry of St. Matthew's Parish, and in 1773 he became a partner with Monroe and John Hamilton in a Hillsborough store. This venture prospered but the business was liquidated in 1775 because of problems connected with the approach of the Revolution. Rochester cast his lot with the Patriots and immediately became involved in political and military affairs.

In 1775 he was named to the Committee of Safety for Orange County and on 20 August attended the Third Provincial Congress as a borough representative of Hillsborough. He was also appointed a major in the militia, a justice of the peace, and paymaster of the battalion of minutemen in the district of Hillsborough. The following year, he was assigned the command of two companies of infantry and one of cavalry to follow Colonel James Thackston in pursuit of the Tories marching to join the British at Wilmington. En route his force captured five hundred Tories retreating from the Battle of Moore's Creek Bridge. Having no place to imprison such a number, the major paroled all except fifty officers, whom he turned over to Colonel Alexander Martin at Cross Creek.

In 1776 Rochester represented Orange County in the Fourth Provincial Congress meeting at Halifax. He was also elevated to the rank of colonel in the North Carolina Continental Line, appointed commissary general of military stores, and assigned to serve with Thomas Burke and Cornelius Harnett on the Committee of Claims and Military Accounts. Named to a commission to establish a gun factory near Hillsborough, he led a wagon train to Philadelphia to obtain iron for the enterprise. In the same year, he was rendered unfit for military duty by a serious illness and resigned his command; however, his role in politics was not affected, for in 1777 Orange County elected him as its representative in the first General Assembly of the state of North Carolina. Later that year he resigned to serve the county as clerk of court and was commissioned as a supervisor for the building of a new courthouse as well as to assist in establishing an academy in the Hillsborough area. In 1778 he resigned as clerk because the fees collected were insufficient to cover the necessary expenses of the office and entered into a mercantile venture in Hillsborough in partnership with Colonel Thomas Hart and James Brown. The business was successful and Rochester began to invest his earnings in real estate, a practice he continued throughout his life.

When the occupation of Hillsborough by the British army became a probability in 1780, the business was liquidated and Hart moved his family to Hagerstown, Md., for safety. The affluent Colonel Hart offered to back his former partner in business in Philadelphia, and the twenty-eight-year-old Rochester accepted. On his arrival in the Pennsylvania city in 1781, he was almost immediately stricken with smallpox. After a lengthy convalescence he abandoned his plans to settle in Philadelphia and joined Hart in Hagerstown, where the two became partners in a flour mill, a nail and rope factory, a bank, and a farm. Rochester lived in Maryland for thirty years; during that time he made two business trips to Hillsborough, was elected to the Maryland legislature, and served as postmaster, judge, sheriff, presidential elector, and vestryman of St. John's Protestant Episcopal Parish.

In 1810, after Hart had moved to Kentucky, Rochester closed his Maryland firm and moved to Dansville, N.Y., where he built a paper mill. Four years later, he moved to Bloomfield, N.Y., where he conducted a banking business and served again as a presidential elector. At this time he purchased a tract of one hundred acres on the Genessee River and laid it out in lots for a town that he named Rochesterville. In 1818 he established his residence in the settlement, the name of which was changed to Rochester, by which the city into which it developed is known today.

For the rest of his life, Rochester was engaged in developing the town he had created and was active in its financial and political life. He was responsible for the creation of Monroe County with his town as the county seat. In addition, he served in the New York legislature, was one of the founders of St. Luke's Protestant Episcopal Church, and amassed a comfortable fortune from his various business interests. A stalwart influential Jeffersonian Republican in politics, Rochester made his last public speech in 1828 while campaigning for John Quincy Adams and against Andrew Jackson for the presidency of the United States.

Nathaniel Rochester's greatest asset was the confidence he inspired in all who knew him, a trust he rewarded with scrupulous honesty, an industrious application of his abilities, exemplary moral conduct, and the valuable contribution of his own ingenuity. Because of this characteristic and its results, he is honored today in the four states where he resided as a Patriot, a pioneer, and a founder.

Nathaniel Rochester is now acknowledged to have made money as a slave trader before his migration to New York and brought his own slaves north when he moved. In 2004, the University of Rochester purchased a 1790 account book from Rochester's descendants that detailed transactions and dealings in slave trade. The notebook is now among Nathaniel Rochester Family papers at the University's special collections department.

Thank you for visiting NCpedia and especially for taking time to share this information with us.

I cannot say why the researcher did not include this information.  My best guess is that the information may not have been available to him at the time.  I see from a news article published in 2014 in the Rochester City Newspaper -- https://www.rochestercitynewspaper.com/rochester/portrait-of-a-slave-tra... – that Rochester’s ledger book was in the hands of descendants and purchased by the University of Rochester Library around that time.

I see another publication from the Rochester Public Library from 2009 -- http://www.rochester.lib.ny.us/~rochhist/v71_2009/v71i1.pdf – that may have some additional information for you.

For additional information about the contents of the ledger records, you may also want to contact the Manuscript and Special Collections Library at the University of Rochester -- http://rbscp.lib.rochester.edu/manuscriptandspecialcollections.  And here is a link to the collection finding aid at the library that includes a list of the collection’s content -- http://rbscp.lib.rochester.edu/1044.

I will be adding an update to the NCpedia entry to include this important information.  And I very much appreciate you alerting us to the need to do this.  Please let me know if you have additional questions.

What are the details of

What are the details of Nathaniel Rochester's
business dealings in the slave trade.
Why doesn't this article discuss this? How many slaves were sold and kept personally by this slave trader?