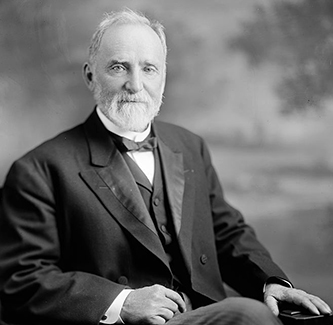 William Robert (Sawney) Webb, educator and U.S. senator, was born near Mount Tirzah, Person County, of Scots-Irish ancestry, the son of Alexander Smith and Cornelia Adeline Stanford Webb. He was the grandson of Richard Stanford, a teacher and congressman. At an early age he moved with his parents to Orange County, where his family had acquired additional farmland. "Sawney" was a childhood nickname that stuck with him throughout his life and came to be spoken with affection. At age twelve he was enrolled at the noted school near Hillsborough conducted by William J. Bingham. He proved to be an assiduous and attentive student, and at seventeen he matriculated at The University of North Carolina, where he became a member of Delta Kappa Epsilon fraternity.

Although originally a Unionist, on 21 May 1861, when he was eighteen, Webb joined the Fifteenth Regiment of North Carolina Troops in Confederate service as first sergeant. Wounded in the right arm at Malvern Hill, Va., on 1 July 1862, he was unable to serve in that position, and as a consequence his rank was reduced to sergeant. While invalided at home recuperating from his injuries, he taught at the Classical School headed by Colonel J. H. Horner at Oxford and pursued his studies at the university. Returning to duty, he was appointed first lieutenant on 17 Mar. 1863. His disability persisted, however, and he resigned on 17 June. Reenlisting as a private on 5 Mar. 1864, he was captured at Amelia Court House, Va., on 5 Apr. 1865 and imprisoned at Hart's Island in New York Harbor.

After the war Webb related an account of one remarkable day that he spent while a prisoner. By diving around a parapet he escaped and went into New York City, where he spent the day sightseeing. Although he was wearing a Confederate uniform no one paid any attention to him. Although he had only a few cents in his pocket, he met a girl from Georgia who managed to get him a meal in a restaurant. At the end of the day he returned to the prison and went to the main entrance, but his account was not believed and he was denied admission. He was able to get back in only by following the same course he had taken in the morning—swimming around the barricade.

He resumed his interrupted studies at the university, which awarded him a B.A. degree in 1867 and an M.A. degree the following year. Webb then accepted a teaching position at the Horner School in Oxford. In 1870, disenchanted with conditions in North Carolina during Reconstruction, he moved west to the hamlet of Culleoka, Tenn., where he became principal of the Culleoka Institute—a moribund academy that he transformed into a thriving private boarding school. Three years later he married Emma Clary of Unionville, Tenn., the daughter of Benjamin Clary of Wilkesboro, N.C., by whom he had eight children.

Webb had a lifelong aversion to alcohol and objected strenuously without avail to Culleoka's open saloons. He determined to move his school to the dry community of Bell Buckle, Tenn., where local citizens had pledged a six-acre site and $12,000 for the new school. It opened there in 1886. Characteristically, Webb spent $8,000 of these funds for the acquisition of books for the school library. Within ten years, the Webb School had become the leading preparatory school of the South.

Slight of stature, redheaded, and physically fearless, Webb in personality and character was the quintessential southern puritan. At the same time, he was unorthodox in many of his moral, political, and social beliefs. Many of Webb's students feared him, a few hated him, but all respected him. His forte was character, his craft was wit and humor, his understanding of boys was intuitive and brilliant. Discipline at Webb School was generally fierce, often corporal, yet "old Sawney," as he came to be known, developed an honor system that was later adopted, with few modifications, by some of the most distinguished American universities.

Probably the heyday of Webb School was the period from 1904 to 1930 when "Webb boys" received more Rhodes Scholarships than those graduated from any other American preparatory school. According to Horace Taft, founder of the Taft School in Connecticut, Webb "accomplished amazing results with such little equipment that he shames the rest of us."

For many years, Webb's younger brother, John Webb—an extraordinarily able teacher—shared the school's principalship. John Webb was no match for his aggressive and domineering brother, however, and was eventually forced to accept a subordinate position. In 1913 the state legislature of Tennessee elected Sawney Webb to the unexpired term of the late Senator Robert Taylor. His brief service in Washington (24 Jan.–3 Mar. 1913) was uneventful except that he did secure passage of a bill to prohibit desecration of the American flag and made an impressive speech favoring Prohibition. On his return to Tennessee he resumed the principalship of the Webb School, assisted by his son, William Robert Webb, Jr.

In 1922 he received honorary doctorates from The University of North Carolina and Erskine College. He lived to see his youngest son, Thompson Webb, found the successful Webb School at Claremont, Calif. For much of his life, Sawney Webb was the most successful and celebrated schoolmaster in the entire South. Active in the Methodist Episcopal Church, South, he was buried in Hazelwood Cemetery, Bell Buckle.

John Andrew Rice, I Came Out of the Eighteenth Century (1942).