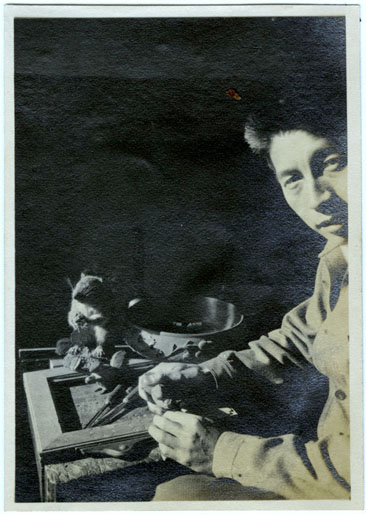 George Masa, Japanese photographer and cartographer, for whom the Great Smoky Mountains were an adopted home, was born Masahara Iisuka (or Iizuka—spellings vary). He was a reticent and somewhat reclusive man, after the fashion of his acknowledged mentor, Horace Kephart. Barbara Thorne, who frequently hiked with Masa in his later years, gives a telling glimpse into his personality in her recollection of a long day on the trail with him. Gently trying, in the course of conversation during a trailside rest break, to learn more about him, she was rebuked for her efforts with an abrupt "more walk, less talk." The statement was typical of this wiry, enigmatic figure who adopted the Smokies and Blue Ridge as his home and cherished them as a region of singular beauty.

Masa came to the United States shortly after the turn of the century (probably in 1906). He had been a graduate student in mining engineering at Meiji University in Tokyo and intended to continue his studies in this country. The unexpected death of his father changed these plans, and the young man abandoned his work towards a career as an engineer.

Apparently, he never returned to his native Japan. Deeply troubled by his father's death, Masa undertook a lengthy period of vagabondage and spent time in—among other locales—Colorado, New Orleans, and St. Louis. In 1915 he went to Asheville with a group of touring Japanese students. Immediately fascinated by the mountains, he left his companions and spent the remaining eighteen years of his life in western North Carolina. It was at this juncture that he adopted the first name George and the shortened form of his last name.

Shortly after his arrival in Asheville, Masa was befriended by a prominent local businessman, Fred L. Seely, and through Seely's influence he procured employment as a valet at the fabled Grove Park Inn. Within a few months he turned to photography for his livelihood. Masa was adept with cameras and first did some part-time work for guests at the inn. Subsequently, he established the Photo-Craft Shop (later renamed the Asheville Photo Service) and in time gained prominence in the region through his work.

Sometime during this period, Masa made the acquaintance of Horace Kephart, who had recently published his widely acclaimed regional study, Our Southern Highlanders. The two men were kindred spirits—reclusive, great lovers of nature's solitude, and more than a little eccentric. Through Kephart, Masa developed an abiding affection for the mountains and their remote, rhododendron-laden ridges, and they would henceforth feature prominently in his life. "Kep," as Masa affectionately styled his companion and teacher, became his idol, and the two worked closely on a number of projects designed to draw national attention to the region. 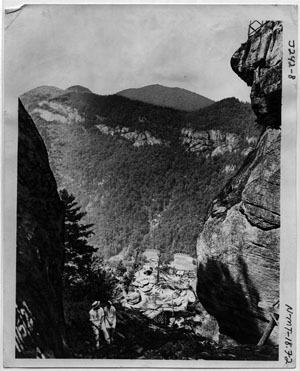 Masa's photographic enterprise was soon a thriving one. He was especially talented in taking "views" of scenic areas in the Smokies, which were reproduced as postcards. He also did considerable work on brochures as well as supplying photographs to the Asheville Chamber of Commerce, newspapers, and national magazines. Like Kephart, though, he cared little for material things and was happiest when hiking, carrying his camera on his back, on some remote mountain path. He frequently traveled by bicycle, a bright red bandana wrapped around his brow as he negotiated trails seemingly impassable except on foot. More than once he startled mountain folks, who had never seen a bicycle, by appearing on wheels in the most unlikely places.

His interest in hiking and the paucity of suitably detailed maps of the Smokies and Blue Ridge led to his becoming an excellent amateur cartographer. Masa's maps were models of accuracy, always based on firsthand knowledge of the region being covered, and he played a key role in laying out southern portions of the Appalachian Trail. Masa was also an enthusiastic advocate of the proposed Great Smoky Mountains National Park, and he assisted Kephart, mostly working behind the scenes, in efforts to make the park a reality. He was an original member of the Nomenclature Committee, which supplied names for the peaks, streams, and other geographic features of the park once it had been created. In keeping with these interests, Masa was also an active charter member of the Carolina Mountain Club, and he served on its council and in other official capacities.

While Masa never fully mastered English, as his extant letters readily indicate, he was the coauthor, with George W. McCoy, of A Guide to the Great Smoky Mountains National Park. In his later years he became a widely known and well-liked "character," and although retiring, he enlivened hiking groups with quips like "off your seats and on your feets."

Shortly after Kephart was killed in a 1931 automobile accident, Masa began to develop health problems. Although the cause of his death was listed as "influenza and complications," it seems likely that he had contracted tuberculosis. He died at the Buncombe County sanitarium and was buried in Asheville's Riverside Cemetery; there was considerable talk, both at the time of his death and later, regarding eventual reinterment within the Great Smoky Mountains National Park. In 1961, after many years of effort by those who fondly remembered the man and his abiding affection for the mountains, an unnamed peak on the main ridge of the Smokies between Mount Kephart and Charlie's Bunion was designated Masa Knob by the U.S. Geodetic Survey.