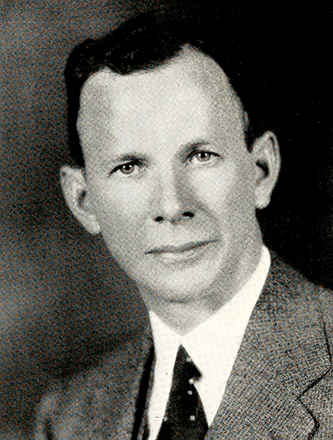 Paul Pressly McCain, physician and leader in the fight against tuberculosis, was born and educated in Due West, S.C., the son of John Irenaeus and Lula Todd McCain. He received an A.B. degree from Erskine College in 1906 and an honorary LL.D. degree from The University of North Carolina in 1936.

In the hope of becoming a medical missionary, McCain taught school for a year after graduation but found that he could not save enough to pay the costs of his medical education. Instead, he borrowed funds and received an M.D. degree at the University of Maryland in 1911. During his internship at Baltimore's Bay View Hospital, he contracted tuberculosis but was able to finish his appointment. After a second flare-up of the disease, he entered Gaylor Farm Sanatorium in Connecticut in 1912 and later took a position on its staff.

In 1914 McCain accepted an appointment as chief of medical service and assistant superintendent of the North Carolina Sanatorium. In 1924 he became superintendent and medical director of the sanatorium and director of its extension service. As the leader of North Carolina's fight against tuberculosis, he was also in charge of the Western Sanatorium when it opened in 1936 and the Eastern Sanatorium in 1941. In addition, McCain was one of the incorporators of the Hospital Savings Association as a Blue Cross plan in 1935, as well as a leader in the effort to expand The University of North Carolina's School of Medicine to a four-year program.

On 17 Oct. 1917 McCain married Sarah Louis (Sadie Lou) McBrayer. They were greatly beloved by people throughout the state because of their personal consideration of patients in the sanatorium. Mrs. McCain herself was a leader. In 1923 she helped organize the Auxiliary to the North Carolina Medical Society and served as its first president. The McCains had five children: Sarah Louise (Mrs. N. H. McCollum, Jr.), Paul Pressly, Jr., Lillian Irene (Mrs. Dan McFarland), John Lewis, and Jane Todd (Mrs. John Reagan).

McCain was a Democrat, an elder in the Presbyterian church, a Mason, and a member of Kiwanis and Sigma Xi; he served as a trustee of Flora MacDonald College. He was buried in the Bethesda Cemetery, Aberdeen. After his death, the town of Sanatorium was renamed McCain in his honor.

Hi, I worked at the McCain

Hi, I worked at the McCain hospital for a few years, I was on the maintenance crew which also served the youth center as well as the women's correctional ctr.in Hoffman NC. There's a graveyard with many headstones in the middle of the woods behind the youth center, alot of the graves had children barried there, anyways the place is haunted and I was wondering who I could contact about some of the ghost of the McCain sanitarium,? Not sure if this is the sight, but thought I'd ask because there's very few apps that even cover the place, thanks if you could send me any leads to someone who is into paranormal activity, I'm not into those sort of things, but I sure can share some personal information about the haunted place. Thanks.