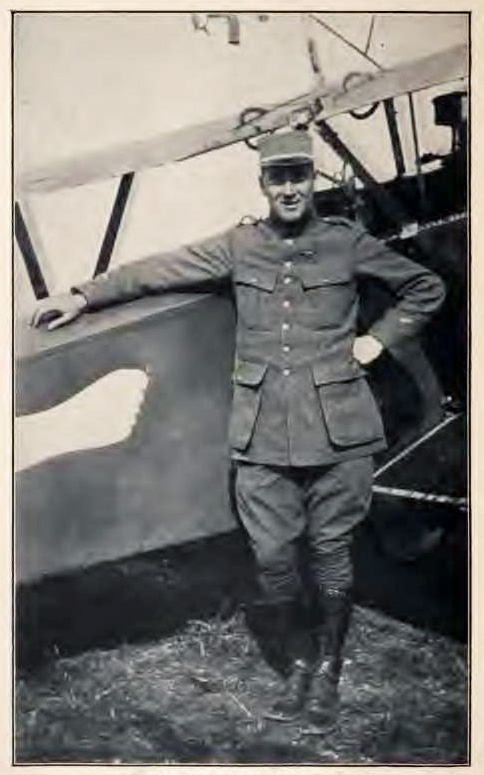 James Rogers McConnell, World War I aviator and author of Flying for France, was born in Chicago, Ill., the son of Judge Samuel Parsons McConnell and his wife. The family moved to New York City following the judge's resignation from the bench and then to Carthage, N.C. James was educated in private schools in Chicago, Morristown, N.J., and Haverford, Pa. In 1908 he entered the University of Virginia, spending two years in the academic department and one in the law school. While there he founded an "aero club," indicating his early interest in aviation. He engaged in numerous collegiate pranks, was elected "King of Hot-Foot" (later painting a red foot on the side of his plane in France), was assistant cheerleader, and joined Beta Theta Pi and Theta Nu Epsilon. In 1910 McConnell left law school and went to live with his family in Carthage, where he was employed as the land and industrial agent of the Seaboard Air Line Railway and secretary of the Carthage Board of Trade. He also wrote promotional pamphlets for the Sandhills area of North Carolina. He never married.

Only a few months after the outbreak of war in Europe in 1914, McConnell joined the American Ambulance Corps and went to France. In a letter to a friend in 1915, he wrote: "Tomorrow I am going to the front with our squad and twelve ambulances. . . . I am having a glorious experience." His rescue of a wounded French soldier while under fire was one of many similar acts that won him the Croix de Guerre for conspicuous bravery.

Dissatisfied with his field of service and believing that America needed to do more in the war against Germany, McConnell resigned from the Ambulance Corps and entered the aviation training program along with many other young Americans including Kiffin Yates Rockwell of Asheville. On completion of this training, thirty-eight pilots formed the famous Lafayette Escadrille, or squadron. Flying Nieuport biplanes that traveled at 110 miles per hour, the pilots were the darlings of the army. McConnell's group consisted of six pilots and seventy ground personnel. Operating from Luxeuil Field in eastern France, they customarily lifted off each day at daylight, clad in fur-lined outfits, to patrol for two hours. Armed with a machine gun, the pilot fired it with one hand while maneuvering the plane with the other hand and his feet. Following the Battle of Verdun, McConnell was given a new plane on which the 500-round Vickers machine gun was synchronized with the propeller. This was the era of dogfights high above the battlefields, of "aces" who shot down five enemy planes, of hot pursuit, of the last resort of individualism in the midst of mechanized warfare. In letters home and in Flying for France, McConnell wrote of the sun on the fog, of silver bullets, of red flames from the artillery below looking like a Doré painting of Dante's hell.

After being wounded once and narrowly escaping death several times, McConnell was flying in the vicinity of St.-Quentin when two German planes cornered him and shot him down on 19 Mar. 1917. The plane and his body were found by the French, and he was buried on the spot at the edge of the village of Jussy. According to one obituary, his death came "far above the smoke and filth and grime in the clear, clean air of heaven, attended by the stern joy of combat."

A monument erected to McConnell in Carthage bears an inscription reading in part, "He fought for Humanity, Liberty and Democracy, lighted the way for his countrymen and showed all men how to dare nobly and to die gloriously." A statue by Gutzon Borglum adorns the grounds of the University of Virginia, with these words at the base: "Soaring like an eagle into new heavens of valor and devotion."

James R. McConnell, Flying for France with the American Escadrille at Verdun (1917).