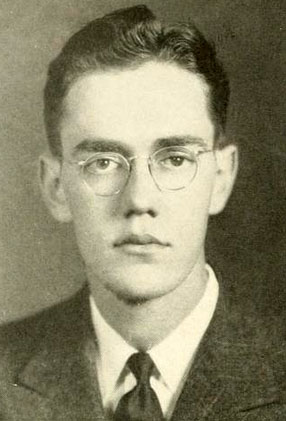 Colbert Augustus (Pete) McKnight, newspaper editor, was born in Shelby, one of three sons of John Samuel, a wholesale grocer, and Norva Proctor McKnight. On graduation from Shelby High School in 1933, McKnight originally intended to teach Spanish at the college level. Although he had been accepted for admission to Davidson College, he decided to delay his enrollment and spend a year studying Spanish in Havana, Cuba, where his brother John was the Associated Press bureau chief. That summer he wrote his first news story—an eyewitness account of mob murders during the coup that deposed President Geraldo Machado. When a hurricane destroyed the school he was to attend, McKnight returned to Shelby and worked for nine months as a cub reporter on the Cleveland Star (now the Shelby Daily Star ). He then entered Davidson College but continued to work on the newspaper during the summers. By 1938, when he was graduated summa cum laude with a major in Spanish and a minor in economics, McKnight had given up the idea of teaching in favor of journalism.

In 1939 McKnight joined the Charlotte News, the city's afternoon newspaper, as a general reporter, covering most of the city beats and editing the radio, book, and cultural pages. He left the News in 1943 to become managing editor of the San Juan (Puerto Rico) World-Journal, an English-language daily distributed mainly to American military bases throughout the Caribbean. Subsequently named editor and then executive editor, with responsibility for supervising all operations of the paper, he also served as a part-time Associated Press war correspondent and as a special correspondent for the Baltimore Sun and Business Week. In October 1944 McKnight returned to the Charlotte News as news editor. He was appointed managing editor in 1947 and editor in 1949.

As early as his senior year in high school, McKnight had spoken out publicly against racial prejudice, and in his News editorials he frequently reflected on the problems of segregation and the need for change. In "Handwriting on the Wall," written in June 1950, he discussed three Supreme Court decisions that seemed to presage the end of governmentally sanctioned segregation. Warning that the impact of these decisions would soon be felt in North Carolina, McKnight declared: "We have said it before. We say it again today. Segregation as an abstract moral principle cannot be defended by any intellectually or spiritually honest person." At the same time, however, he felt that the system would have to "be worn down, bit by bit" and worried that the Supreme Court or Congress might force change too rapidly for Southerners to accommodate.

Anticipating the Supreme Court's decision declaring segregation in public schools unconstitutional, McKnight and several southern members of the American Society of Newspaper Editors met with representatives of the Fund for the Advancement of Education in April 1954 to plan the establishment of a news service to provide "objective, accurate, and authoritative" reporting on developments arising from the Court's action, which occurred in May. By June, McKnight had been named the first executive director of the Southern Education Reporting Service and he moved to Nashville, Tenn., to open the headquarters. From the District of Columbia and the seventeen states where segregation in the public schools was then required by law, he recruited correspondents to provide reports for publication in the Southern School News, a monthly sixteen-page tabloid that he edited. In the first issue, dated 3 Sept. 1954, McKnight denied allegations by critics that the Southern Education Reporting Service had been established either to promote integration or to preserve segregation. It would "not be an advocate for or against anything" but would "adhere scrupulously to the accurate and objective reporting of facts as it finds them." By the time he resigned in July 1955, the organization's newspaper was being distributed free to 30,000 government officials, school administrators and school board members, libraries, newspapers, radio and television stations, federal agencies, and interested citizens.

McKnight resigned from the Southern Education Reporting Service because Knight Newspapers, Inc., had picked him to be editor of the Charlotte Observer, which it had recently acquired. Although the Observer surpassed its afternoon rival, the Charlotte News, in advertising revenue and circulation, the News was the livelier of the two papers. The Observer tended to be an uncritical booster of business and to avoid controversy. With full responsibility for the news and editorial functions of the paper, McKnight had greater authority than any Observer editor since 1909, and he undertook to implement the new owner's plan to rebuild the paper from top to bottom. He soon opened bureaus in Raleigh and Columbia, S.C., added a dozen new correspondents throughout the Carolinas, encouraged his staff to do investigative reporting, and began to endorse political candidates.

The Observer 's new editor was not timid in supporting causes he believed in, and under his direction the paper spoke out forcefully on such issues as urban renewal, city-county school consolidation, better race relations, the arts, and the conversion of Charlotte College into the fourth campus of The University of North Carolina. He further assisted these and other causes by serving on the boards of directors of numerous civic and arts organizations and on the advisory boards of several educational institutions. From 1963 to 1965 he was president of the North Carolina Fund, a statewide demonstration project to test antipoverty plans.

Although most of his contemporaries regarded McKnight as a liberal, a recent assessment by Frye Gaillard has pointed out the conservative motivation behind the editor's beliefs and actions. He wanted to preserve the tranquility and prosperity of his community, but he knew that to do so required change. In 1963, for example, he told Charlotte's mayor that if the city were to avoid the open racial strife occurring elsewhere, the civic leadership had to begin to stimulate and direct that change. As a member of the executive committee of the Charlotte Chamber of Commerce, he was the primary author of the resolution passed by the chamber in support of voluntary desegregation of hotels, restaurants, theaters, and public swimming pools. The school busing controversy of the late 1960s and early 1970s was a much more divisive issue, however, and the McKnight-led Observer was one of the few local institutions to support, from the beginning, the federal court orders requiring busing to desegregate the Charlotte-Mecklenburg schools.

During the busing controversy, McKnight faced his own personal crisis when an inflammation in his one good eye left him nearly blind for a year and a half. (A childhood injury had cost him the sight of one eye.) As a result of this battle, the constant daily work pressures, and an assortment of other ailments, he became increasingly isolated from the paper's day-to-day operations. In September 1976 he was replaced as editor and named associate publisher.

McKnight was a founder of the North Carolina Conference of Editorial Writers and served as president of the North Carolina Press Association and of the American Society of Newspaper Editors. In the latter role, he testified in 1971 before the U.S. Senate Judiciary Sub-committee on Constitutional Rights concerning the application of First Amendment principles to the press and the relationship between the press and the government. In 1977 the society named him director of its Newspaper Readership Project to research and report on the needs and desires of newspaper readers. McKnight retired as associate publisher of the Observer in 1978, but he continued as director of the readership project until a heavy schedule and recurrent health problems forced him to resign in August 1981.

McKnight married Margaret Henderson in 1941, and they had three children: John Peter, Margaret Carson, and David Proctor. After his first marriage ended in divorce, McKnight married Gail Oliver Ehle in 1968. They had one child, Colby Augustus. McKnight died in Charlotte and his body was cremated.