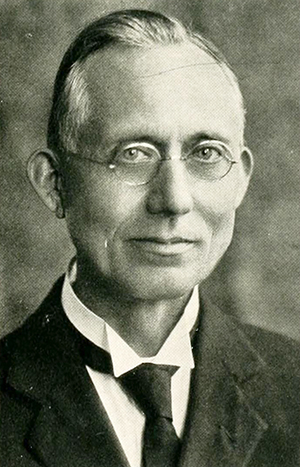 Robert Lee Moore, teacher, administrator, and Christian layman, was born in Globe Valley, Caldwell County, the son of Jesse Daniel and Mary Ann Berry Moore. A fifth-generation descendant of the Moores who settled Globe Valley, he attended local schools near his home and later Globe Academy, where he studied under R. L. Patton and W. F. Marshall, teachers who had a strong influence on his life. He entered Wake Forest College as a junior in 1888 and completed a bachelor of arts program in two years. His program was interrupted, however, by the need to earn money for expenses. After his first year of study he taught for two years, first at Globe Academy, then at Valle Crucis, and finally for a year and a half at Amherst Academy in Burke County. In the fall of 1891 he returned to Wake Forest and was graduated the following June. In 1927 the college awarded him an honorary doctor of education degree.

While at Wake Forest, Moore had a deep religious experience, announced his decision to be a Christian, and joined the local Baptist church. Although he never became a minister, he gave generously of his time, money, and talents in support of the church and its denominational programs. Through the years he served as Bible teacher, Sunday school superintendent, deacon and clerk of his church, and officer and leader in the local association. In later years he was a trustee of Wake Forest College and of the North Carolina Baptist Orphanage, as well as a member of various committees of the North Carolina Baptist State Convention.

After his graduation from Wake Forest, Moore returned to Amherst Academy and served as principal for five years. There he found among his students his future wife, Edna Corpening. They were married on 11 June 1895. Two years later Moore was offered a position as president of Mars Hill College, and the young couple moved to the mountain community where they would invest their lives in the cause of education for the area's youth. They had a son and a daughter; a third child died in infancy.

When Moore went to Mars Hill in June 1897, conditions at the so-called college would have discouraged most people. Its two brick buildings (one owned in part by the Masonic lodge) were both in need of repair and one unfinished wooden structure maintained a heavy debt. The grounds were unkempt. For several years the school had been running a deficit for current expenses, and the trustees had often found it necessary to raise money or pay salaries out of their own pockets. Frustrated and weary with their endless trials, the trustees offered to lease the institution to Moore with the understanding that he find the students, hire the teachers, raise the money, and run the school. Whatever profits there might be at the end of the year would constitute his salary. Moore accepted the offer—and the challenge.

Later in the summer, after a period of study at The University of North Carolina, Moore returned to Mars Hill, prepared a small catalogue, and began traveling over the region, talking to prospective students and promoting the college generally. When the school opened in the fall, one hundred and eighty students enrolled. Forty-one years later, at the time of Moore's retirement, the student body had grown to seven hundred; the faculty had increased from three to thirty-six; instead of two buildings, there were more than a dozen; and the original four acres had been expanded into a campus of more than a hundred acres. The school was an accredited junior college recognized for its superior academic program.

These accomplishments required great sacrifice and dedication. During the early years the task was difficult, and many times the college's income was in foodstuffs, wood, or labor. Mrs. Moore shared in the work needed to feed, house, and teach the students. She dried and canned fruits and vegetables, conserving the extra food brought as payment on tuition and fees. She served as the school's housemother, dietitian, nurse, and business manager. The Moores took students into their home, and when a residence hall was available, they moved into the dormitory and lived there for almost thirteen years, caring for the students as houseparents. They shared their linens and blankets with those who had none or too few. Their own china and wedding silver were used in the common dining room, and for years the only practice piano was the one in their living room.

It was Moore's policy never to turn away any boy or girl who wanted an education. Student expenses were kept at a minimum, and for several years room and board were provided for five dollars a month. Through all the years of his administration he fought to keep fees down, and Mars Hill never ceased to respond to the cry of the poorest who were worthy and wanted to "improve themselves." Moore did not believe in giving money to students, however, for giving did not develop character and "qualities of resourcefulness, industry and independence in the beneficiaries," whereas offering them an opportunity to make their own way frequently achieved those goals. Acting on this philosophy, he found work for those who needed to earn all or part of their expenses. They were employed to cook and serve meals under supervision in the kitchen, to cut wood and build fires, and to look after the buildings and grounds. A large percentage of the students paid their expenses in this manner.

With determination and business acumen, Moore met operating expenses without deficits and, through sacrifice and savings, raised funds for additional land, new buildings, and needed equipment. He allowed himself a salary of only three hundred dollars a year (reports say his income fell as low as twenty-five dollars during the first few years), returning all other profits to the institution. When the trustees resumed control of the college in 1915 and he was placed on a regular salary, he would never agree to a sum higher than that paid any faculty member—and he continued to return much of that to the college in gifts.

If, however, the school were to survive and become a significant citadel of education in western North Carolina, much more money was needed than what the Moores could hope to save out of the regular college income. The trustees of the college were not a dependable source of support, for, with a few exceptions, they lacked the vision, faith, and courage to undertake the improvements and expansion of facilities that President Moore felt were necessary. Moreover, demands for payment of debts incurred during former administrations continued to plague the school; at times these had to be paid out of some small pittance the Moores had been able to save for themselves. The Southern Baptist Home Mission Board, through its Department of Mountain Missions and Schools, in cooperation with the North Carolina Baptist State Convention, provided some relief, but the greatest assistance came in the form of gifts from an ever-increasing number of individual supporters. Moore's unwavering commitment to education for mountain youth and his integrity as president and administrator attracted the attention of several men who had money and were willing to invest in a sound project. The contributions of one benefactor amounted to a hundred thousand dollars within a few years. Others were equally generous with their gifts.

In 1915, when the college had become financially sound, President Moore turned it over to the board of trustees. In 1921 he separated the high school work from the two-year college program and reorganized the college curriculum to meet standards required for accreditation by the Southern Association of Colleges and Secondary Schools. One of the conditions for accreditation was an assured income beyond student tuitions and fees, and Moore launched a campaign to build an endowment fund adequate to meet this stipulation. He led the school through the Great Depression of the thirties without cutting salaries, except for his own, and without curtailing the academic program. In 1935, as the depression began to ease, he initiated a campaign to raise money for two new dormitories and the renovation of a number of older buildings. Meanwhile, the college bought land for an athletic field and hired a man to landscape and care for the campus.

Throughout his administration Moore was committed to academic excellence and the ideals of the Christian faith. He maintained that the teacher was the keystone of any good school and he chose his faculty with care, selecting teachers on the basis of their character and commitment to service as well as their academic qualifications. He believed that the college should train future leaders of the Baptist denomination, especially young ministers. In cooperation with the local pastor, the Reverend J. R. Owen, he helped organize periods of study under qualified teachers for ministers already in service. The first of these pastors' schools was held during the summer of 1934; later they were taken over and sponsored by the Baptist State Convention. In addition to the pastors' schools, Moore, with Dr. Walter N. Johnson of Salisbury, organized a churchman's retreat for Christian leaders of all races. This multiracial conference was housed in one of the dormitories, and the participants ate their meals together in the college dining room. Long before the beginnings of racial integration, ministers and Christian laymen of several faiths were learning the meaning of brotherhood in these Mars Hill retreats.

In spite of his full-time schedule at the college, Moore found time to work in the community. He led the movement to improve county public schools; largely due to his efforts, the first public elementary school in the Mars Hill area was built in 1904. In 1925 he was influential in getting a public high school for the community. For two years (1903–5) Moore served as county superintendent of schools, and for a number of years he was a member of the county school board. To improve the general level of instruction in the schools, he set up teachers' institutes at the college during the summer. He worked to secure better roads for Mars Hill and the county, and he actively supported all efforts on behalf of good government.

In 1938, after forty-one years of service, Moore gave up his duties as president, but for a number of years he continued to teach almost a full load, to serve on college committees, and to keep up with more than six thousand alumni. He also remained active in the local Baptist church as senior deacon and teacher of a large class of young men. Finally declining health forced him to give up his work at the college. After several months of illness, he died and was buried in the Mars Hill Cemetery. Mars Hill College, with much of the character he gave it, is a monument to his life. His portrait hangs in the Memorial Room of the Robert Lee Moore Memorial Auditorium on the campus.