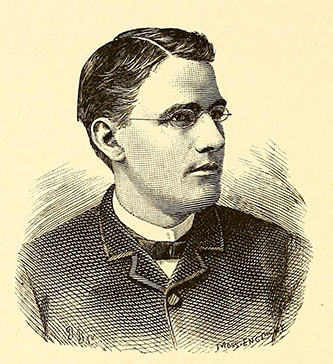 Edward Pearson Moses, educator, was born in Knoxville, Tenn., the son of John L. of Exeter, N.H., and Susan Williams Moses of Knoxville. Threatened by Union forces during the Civil War, the family moved to Exeter when Edward was seven, and for the next four years he was educated in the town's excellent public school system. Later in life he would say that he wished every child in the South could have the same "fine education" he had received in Exeter. After the war his family returned to Knoxville, where, at age seventeen, he was graduated from East Tennessee College (later the University of Tennessee) with both B.A. and M.A. degrees. He immediately began teaching in the Knoxville public schools, where he was influential in the establishment of a graded system and new methods of instruction—particularly the use of phonetics in spelling lessons. At age twenty Moses became principal of the Boys' High School of Knoxville (1877–81).

Moving to North Carolina, he was superintendent of public schools in Goldsboro (1881–85) and then Raleigh (1885–95 and 1898–1907). Although successful in both systems, he is noted especially for his innovations and achievements in Raleigh.

Over the years, North Carolina's public school system had suffered from the lack of financial and political backing. When Moses arrived in Raleigh, the city's system was just beginning to gain support—a new elementary school was opened at the time of his installation. Continuing the momentum, he made similar advancements throughout the next two decades. By the end of his term in 1907, five graded schools and one high school had been purchased or built in Raleigh. Moses introduced the graded school and the nine-month school term to the Raleigh system, as well as new ideas in teaching. He believed that reforms in education should begin at the elementary level and in this regard was influenced by the work of J. H. Pestalozzi, a Swiss educator.

Between 1895 and 1898 Moses was a professor of pedagogy at Winthrop College in South Carolina before he was recalled to Raleigh. After his return, he initiated an industrial arts program in the city schools. He also served as superintendent of the Summer Normal School at The University of North Carolina and as vice-president of the North Carolina Teachers' Assembly (1885–86). He promoted the idea of the North Carolina Historical Commission and was influential in having a resolution passed for its establishment. In addition, Moses was one of the first members of the Watauga Club, formed "to encourage free discussion and promote the educational, agricultural, and industrial interests of the state." He wrote books for the teaching of reading and spelling, including Moses' Primer, Moses' Phonic Readers, and First Reader with 4,000 Words for Spelling by Sound.

A pioneer in the institution of public libraries, Moses was especially supportive of libraries for children. After the school term in 1907, he moved to Tampa, Fla., where he contributed to the administration of the public library system. He then lived in Chapel Hill briefly before finally settling in Nashville, where he became influential in the establishment of the Great Smoky Mountains National Park.

Moses influenced the major educators of North Carolina, including P. P. Claxton, Edwin A. Alderman, James Y. Joyner, and Charles Duncan McIver. Claxton dubbed him "the modern Pestalozzi." In 1945 he received an honorary doctor of law degree from The University of North Carolina.

His wife was Carrie Dosser of Jonesboro, Tenn. They had five daughters and one son. His oldest daughter, Susan Williams, became a Latin teacher at Newcomb College of Tulane University in New Orleans.