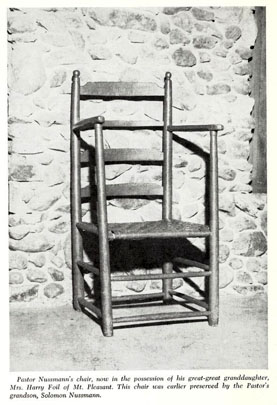 Adolph Nussmann, first resident Lutheran clergyman in North Carolina, was born in Münster, Westphalia, the son of Joan and Joanna Maria Hilleke Nussmann. On 12 July 1739 he was baptized a Roman Catholic in the Liebfrauen Church, Münster. As a young man he became a Franciscan friar, but, "through the study of philosophy" and "a more intimate acquaintance" with the Evangelical or Lutheran church, he "was led to serious reflection." Later, "at the University of Göttingen and also in his work at the Teacher's Seminary in Hanover," he became "more and more confirmed . . . in the doctrines and convictions of the Evangelical Religion."

In 1772 "about sixty families, adherents of the Augsburg Confession" in North Carolina, sent two delegates to Europe in search of a resident pastor and a school-teacher. The delegates, Christopher Rintelmann of Zion (Organ) Church, Rowan County, and Christopher Layrle of St. John's, Mecklenburg (now Cabarrus) County, went first to London and then to Hanover, where the Consistory selected Nussmann as pastor and Johann Gottfried (John Godfrey) Arends as schoolteacher. Before his departure, Nussmann received "written pastoral instructions" from the founder of the Teacher's Seminary, Gabriel Wilhelm Goetten, as well as "a considerable number of Bibles, hymnals, catechisms and other books." In London, Nussmann preached at the German Court Chapel to "the general satisfaction" of its "enlightened members." He also overcame the objections of Dr. Johann Casper Velthusen, a prominent Lutheran theologian, who admitted to some "hesitations" regarding the appointment of so recent a convert from Catholicism. Velthusen and the other members of the Court Chapel became "very fond" of Nussmann during the time he awaited a ship for Charles Town, S.C., and to reduce the drain on his funds, "gave him his meals at their own tables." As he prepared to depart, Velthusen gave him "a special gift" for his personal use from George III and Queen Charlotte.

Nussmann and Arends arrived in America in 1773. At first, Nussmann settled in Rowan County and divided his time between Zion (Organ) Church, on Second Creek, ten miles southeast of Salisbury, and St. John's, Salisbury. He also visited St. John's Church, Mecklenburg (now Cabarrus) County. Some members of Zion Church, however, turned against Nussmann when they discovered that he had been a Roman Catholic. At the end of his first year, therefore, he left the pastorates of Zion and St. John's, Salisbury, in the hands of the schoolteacher Arends and established his home on Buffalo Creek, about a mile and a half east of St. John's Church, Mecklenburg County. The church on Buffalo Creek received him "at once in the most friendly manner." Nussmann wrote the church's first constitution, which required the pastor to "accept with heart and mouth" the various "Symbolical Books of our Evangelical Church." Besides St. John's, Nussmann served a congregation with an "admixture of members of the Reformed Church," located six miles southwest of that on Buffalo Creek, and, later, an "Evangelical Congregation near Peintchurch," three miles southeast of Salisbury. "Thus," he wrote, "I made my living during this time, although sometimes rather meagerly, and with much hard work." In 1774 Nussmann married Elizabeth Rintelmann, the daughter of Christopher Rintelmann. After her death, he married Barbara Layrle, the daughter of Christopher Layrle. Elizabeth was the mother of his son Paul and his daughters Margaret and Elizabeth, and Barbara was the mother of his sons John and Daniel and his daughters Catherine and Barbara.

The outbreak of the American Revolution interrupted all communication with Europe, cutting Nussmann off from Velthusen and the Consistory of Hanover. Isolated from his friends abroad, he corresponded with the Reverend Henry Melchoir Muhlenburg in Pennsylvania and became more closely associated with the Reverend Frederick Daser of Charles Town, S.C. During the war, Nussmann conducted services as regularly as conditions permitted and continued the educational work of the parish schools. In 1783 the main school at St. John's had an enrollment of seventy-two children, and two smaller schools recorded enrollments of thirty-six and twenty, respectively. Two years later, the General Assembly added Nussmann to the board of trustees of the Salisbury Academy.

In 1786, almost fourteen years after his departure from Europe, Nussmann wrote the first of several letters to Dr. Velthusen at the university in Helmstedt, Brunswick. "With sadness," he told Velthusen, "I observe every day something lacking, now here, now there, and now everywhere." Nussmann "urgently requested" Velthusen to send "at least two preachers," young men with "determination, courage, and a genuine apostolic spirit." Even more urgently, he requested "an entirely new catechism for the young people of North Carolina," one that "would stand up under the severest test." Finally, he asked Velthusen to send him "books suitable for the establishment of a church and school library."

Velthusen believed Nussmann's demands to be "so just and so urgent" that, he wrote, "it was merely a question of how we might in the best manner achieve that which was expected from us." With several colleagues, Velthusen organized the Helmstedt Mission Society, and within two years, three preachers—Christian Eberhard Bernhardt, Carl August Gottlieb Storch, and Arnold Roschen—had joined Nussmann and Arends in North Carolina. With the help of wealthy Germans, Velthusen and his associates also prepared and published at least eight textbooks for use in the parish schools, including the "Helmstaedt" or "North Carolina Catechism." In addition, Velthusen sent many other books for use in the church libraries and for distribution to the poor.

Nussmann worked in "brotherly harmony" with his new colleagues. In 1791 they elected him chairman of their first "semi-annual Assembly." First alone, and then as the senior member of an expanding group of ministers, Nussmann "had supervision over an area of some seven hundred square miles," which included approximately twenty widely scattered congregations in twelve or more present-day counties. In 1794 "a gangrenous ulcer of the breast" ended his life at age fifty-five. "What this unusual man had been in health," wrote Storch, "he remained during the most violent pain." Nussmann was buried in St. John's churchyard, Cabarrus County.

G. D. Bernheim, History of the German Settlements and of the Lutheran Church in North and South Carolina (1872). https://archive.org/details/historyofgermansin00bern  (accessed September 30, 2014).