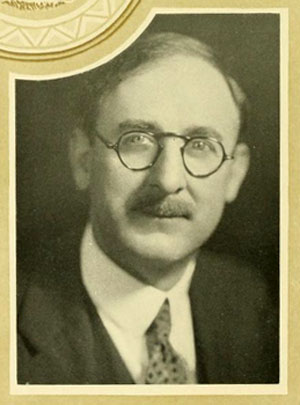 Howard Washington Odum, American sociologist, was born near Bethlehem, Ga., the son of William Pleasants and Mary Ann Thomas Odum. He was graduated from Emory College, Oxford, Ga., in 1904. Young Odum taught in a rural school in Mississippi, collected materials on Negro life for two dissertations, and "commuted by muleback" to the University of Mississippi, in nearby Oxford, from which he received a master's degree in the classics in 1906. Here he later became a colleague of Professor T. P. Bailey, a recent graduate of Clark University, who aided Odum in the transition to the social sciences and helped him secure a fellowship with G. Stanley Hall at Clark. Odum earned a doctoral degree from Clark University in social psychology (1909) and from Columbia University in sociology (1910). His two dissertations on black studies were published: the first was on religious traits in folk songs, and the second was on black social life.

Returning to Georgia, Odum taught at the University of Georgia and at Emory University. In 1920 he moved to The University of North Carolina, where he spent thirty-four productive years. It was Harry W. Chase, a fellow student at Clark and the new president of The University of North Carolina, who brought Odum to Chapel Hill as Kenan Professor of Sociology and head of the recently formed Department of Social Welfare. Odum established the journal, Social Forces, and the Institute for Research in Social Science and promoted a new Department of Planning (1947).

Resuming his writing, Odum cultivated four related areas: race, region, social planning, and folk sociology. His selected writings, Folk, Region, and Society (1964), a volume edited by Katharine Jocher and others, has a biography and a bibliography. Recording changes in values and attitudes over forty-five years of Negro life and culture with humane scholarship, Odum did much to improve race relations. His Rainbow Round My Shoulder (1928) was a work of literary artistry, a semipoetic account of a black Ulysses. Two other volumes appeared in his "trilogy." The development of his thought—its complexity and its unity—was illustrated as Odum moved from the Negro and Negro folk song to the folk society, from the South as a section and region to regionalism and regional-national planning, from folkways to technicways to stateways, and from social values to social action.

At the request of President Herbert C. Hoover, Odum secured foundation backing for a national study of social trends, persuaded W. F. Ogburn to direct it, and served as assistant director. Recent Social Trends in the United States was published in two volumes in 1933. Later he noted the lack of systematic treatment of diverse areas. In regionalism, Odum was at his best. His perceptive study of the South, An American Epoch (1930), was preliminary to his Southern Regions (1936). In this full-scale analysis, he used cultural indices to delimit the South as an ecological unit in order to demonstrate both the immaturity and the potentials of southern development. Odum sought new standards for the South in race relations, industrialization, and regional planning. Regional planning involves regional-national equilibrium. With Harry Moore, Odum wrote American Regionalism (1938), depicting the nation's eight regions. Odum, who believed the South was pursuing an absolute sectionalism, advocated a regional approach.

Odum was a builder and "a scholar in the grand manner" who became a public figure. He brought over $650,000 in funding to The University of North Carolina, and his ready access to foundations was the wonder of all who knew him. Under his direction, the Institute for Research in Social Science published 87 books and 322 articles, many in Social Forces. Odum's own output consisted of 22 volumes and some 200 articles. In the throes of production, he slept little and made full use of his great energy. Called a "promoter," Odum selected younger men and attended to the funding and publication of their projects. No man for the ivory tower, he placed emphasis on using as well as obtaining knowledge.

He advised public officials and participated in setting up organizations devoted to regional development. Certain projects that later succeeded had been outlined earlier in his published work and correspondence, indicating that his fine imagination was capable of anticipation.

Many honors came to Odum, including the presidency of the American Sociological Association in 1930. He received honorary degrees from Emory University (LL.D., 1931), the College of the Ozarks (Litt.D., 1935), Harvard University (LL.D., 1939), and Clark University (L.H.D., 1941). His work in race relations brought Odum the Catholic Conference of the South's award in 1943 and the Bernays Award in 1945. Resolved not to leave the South permanently, he held various visiting professorships for brief periods. In 1953 Odum received the O. Max Gardner Award for the faculty member "who in the current year has made the greatest contribution to the welfare of the human race." A select herd of Jersey cattle that he kept won one of the few awards of Master Breeder from the American Jersey Cattle Association. His whimsical comment that his bulls were worth more than his books was widely quoted.

Many who feared the impact of his new ideas never realized the true conservatism of his thought. To students who advanced simplistic explanations, Odum replied: "That is true, but what else is true?" "Academic statesman of the South at its best," Odum at his death was called the "Eli Whitney of the Modern South" by the Washington Post, which said he inspired a revolution.

Odum retired in June 1954 at age seventy and died the following November. His last words, said to a good friend visiting him in the hospital, were: "Everything is going to be all right."

International Encyclopedia of the Social Sciences (1968).

Odum, Howard Washington. The Negro and his songs : a study of typical Negro songs in the South. Chapel Hill : The University of North Carolina Press. 1925. https://archive.org/details/negrohissongsstu00odum (accessed September 26, 2014).