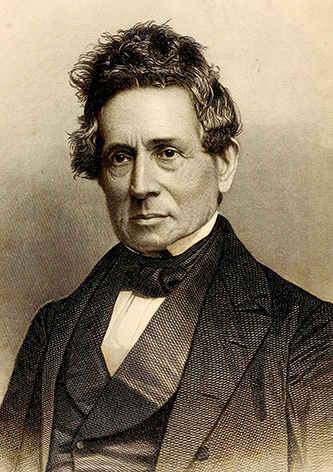 Denison Olmsted, teacher and physical scientist, was born in East Hartford, Conn., into a family of early New England settlers. He was the fourth child of Nathaniel Olmsted, a respected farmer of moderate means and a descendant of John Olmsted, who emigrated from Essex, England, to Connecticut in 1632. His mother was Eunice Kingsbury Olmsted (1755–1846), the daughter of Denison Kingsbury of Andover, Conn. His father died when Denison was a year old. In 1800 his mother remarried and the family moved to Farmington, Conn. During several winters Olmsted lived with the family of Governor John Treadwell, who befriended and tutored him. His mother strongly influenced his religious and moral training and encouraged his interest in learning.

After clerking in a country store, Olmsted was prepared for college by James Morris of Litchfield South Farms and later by the Reverend Noah Porter in Farmington. He entered Yale College in 1809 and was graduated high in his class in 1813 with a B.A. degree. A classmate was Elisha Mitchell, with whom he continued a personal and professional association. For the next two years Olmsted taught in a private school for boys in New London, Conn.; in 1815 Mitchell took charge of a girls' school in the same town, where both men met their future wives. In 1815 Olmsted became a tutor at Yale and, intending to enter the ministry, studied theology with President Timothy Dwight. He obtained an M.A. degree in 1816, when he presented a plan for a state-supported seminary for schoolmasters, a forerunner of the normal school.

In November 1817 Olmsted and Mitchell joined the faculty of The University of North Carolina, Olmsted as professor of chemistry, a newly created position, and Mitchell as professor of mathematics, to fill the vacancy created in December 1816 by the second election of Joseph Caldwell as president of the university. The two appointments were recommended by Congressman William Gaston, a longtime trustee; Gaston had learned of the two young men from the Reverend Sereno Dwight, chaplain of the U.S. Senate and the son of President Dwight of Yale. As he was poorly prepared to teach chemistry, Olmsted received leave for a year's private study with Benjamin Silliman, professor of chemistry and natural history at Yale. This opportunity completely reoriented Olmsted's career. Also during this time (1818), he married Eliza Allyn of New London. He began teaching at Chapel Hill in the fall of 1819. Meanwhile, Mitchell had assumed his duties in January 1818. Following his marriage in 1819, Mitchell and his wife lived for a time in the Olmsted household.

Olmsted seems to have begun at once to investigate North Carolina geology. In 1820 he published a work on the red sandstone and coal of the Deep River area, and in 1822 he contributed two papers on the state's rocks and minerals. In 1821 he had proposed to the Board of Internal Improvements that he undertake a survey of the geology and useful minerals in North Carolina during his vacations, requesting only $100 to cover traveling expenses. The board turned him down. At the end of 1823, however, the legislature directed the Board of Agriculture to have a geologic and mineralogical survey made; the sum of $250 per annum for four years was appropriated and Olmsted was employed to do the work. He examined chiefly the Piedmont and in 1824 and 1825 wrote two reports totaling about 100 pages; 1,500 copies of each were printed. He also prepared a manuscript geologic map of the state, dated November 1825, which was never printed. This was the first geologic examination of a state undertaken at public expense. When Olmsted left North Carolina at the end of 1825, the survey was continued by Elisha Mitchell, who also succeeded him as professor of chemistry, mineralogy, and geology.

Though brief, Olmsted's contribution to knowledge of North Carolina geology was significant. William Maclure's work in 1809, covering the eastern half of the country, had differentiated in North Carolina only three groups of rocks. Olmsted, on the other hand, mapped and described eight subdivisions. Most significant was the delineation of the "Great Slate Formation" in the central Piedmont and the two sandstone belts. He traced belts of iron ore, limestone, and plumbago (graphite), reported building stones, and throughout emphasized useful mineral products. He employed Charles E. Rothe, a Saxon mining engineer, to prepare a report on the gold mines, which was published with Mitchell's work. Olmsted's practical outlook is further indicated by his pamphlet on the preparation of mortar, which he read to the Agricultural Society in 1821, and by his experiments on making illuminating gas from cottonseed, a method later improved and patented in July 1827.

In 1825 Olmsted accepted the chair of mathematics and natural philosophy (physics) at Yale College, though this again involved a drastic change in field. He did not feel fully competent in higher mathematics and requested that this be deleted from his job description, which was finally done in 1835, when he became professor of natural history and astronomy. Olmsted occupied this position for the next twenty-five years.

In 1829 his wife died, leaving five sons and two daughters. Two years later he married Julia Mason of Rensselaer County, N.Y., by whom he had one daughter. His four oldest sons were graduated from Yale and started promising careers in science and medicine, but all died of consumption between 1844 and 1853.

Olmsted wrote several widely used and profitable textbooks. The first was his two-volume Introduction to Natural Philosophy, appearing in 1831 and 1832, followed in 1833 by an abridgment entitled School Philosophy. In 1839 he published an Introduction to Astronomy for college use and two years later an abridged Compendium of Astronomy for schools. He wrote Letters on Astronomy, Addressed to a Lady (1841) at the request of the Massachusetts Board of Education. Finally, his Rudiments of Natural Philosophy and Astronomy for elementary schools appeared in 1844; this was also issued in an edition with raised letters for use by the blind. Some of these texts went through five to one hundred editions; more than 200,000 copies were sold.

Olmsted was an industrious and successful teacher of astronomy, meteorology, and physics. He used experimental demonstrations during his lectures and introduced laboratory work in his classes. Continuing his interest in the common schools, he addressed meetings of teachers, published papers on teaching methods and qualifications, and appeared before the legislature on school matters. In 1840 he was a member of the Connecticut Board of Commissioners for Common Schools. He and Professor Silliman gave lectures at night to mechanics and others who could not study during the day. He delivered public lectures and contributed articles to the press on scientific concerns.

Although Olmsted regarded himself primarily as a teacher, he was also an internationally recognized investigator in meteorology and astronomy. He published many scientific papers, including those on the thermometric observations made by Dr. Joseph Caldwell in 1820–22, his thoughts on the causes of hailstorms (1830), and the behavior of lightning (1850). By his detailed observations of the famous meteor shower of 13 Nov. 1833, he established the periodicity of such falls and their origin by matter from outside the earth's atmosphere revolving around the sun, perhaps derived from comets. He also set forth his ideas on the zodiacal light, suggesting a possible relationship to meteors. He and Professor Elias Loomis of Yale were the first American observers of the return of Halley's comet in 1835. After studying the aurora borealis for more than twenty years, he published (1856) a detailed description and analysis of this phenomenon, in which he clearly showed it to be secular and of cosmic rather than earthly origin.

Olmsted wrote memoirs of Sir Humphrey Davy, Eli Whitney, E. P. Mason, John Treadwell, W. C. Redfield, Timothy Dwight, and others, reviewed various publications, and contributed religious essays. He was active in the programs of the American Geological Society and the American Association for the Advancement of Science. New York University awarded him an honorary LL.D. degree in 1845.

He died at his residence in New Haven, Conn., after a two-month illness and was buried in that city. He was survived by his wife, three children, and a brother.

"On the Recent Secular Period of the Aurora Borealis," Smithsonian Contributions to Knowledge, vol. 8 (1856).

Charles Phillips, A Memoir of the Rev. Elisha Mitchell (1858).