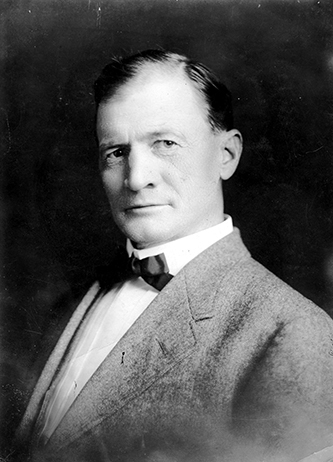 Wallace Carl Riddick, educator and engineer, was born in Wake County, the son of Wiley Goodman and Anna Jones Riddick. After attending Wake Forest College for two years, he transferred to The University of North Carolina and received a B.A. degree in 1885. He then studied civil engineering at Lehigh University in Pennsylvania, receiving a C.E. degree in 1890. Riddick returned to Wake County and was a practicing civil engineer for two years. In 1892 he joined the faculty of the North Carolina College of Agriculture and Mechanic Arts (now North Carolina State University) in Raleigh as professor of mechanics and applied mathematics. He became head of the Civil Engineering Department when it was established in 1895 and remained in this post until elected vice-president of the college in 1908. Riddick continued to teach courses in civil engineering as well as act as an engineering consultant.

In 1916, when the presidency became vacant through the resignation of Dr. D. H. Hill, Riddick was selected from a long list of candidates to head the college. His administration (1916–23), which spanned the war years and the period immediately following, was marked by rapid change. When a unit of the Student Army Training Corps was established at the college in October 1918, the institution's curricula were revised to meet the military's requirements and the whole student body was organized into a military corps. Following the armistice, the unit was demobilized and a unit of the Reserve Officers Training Corps was reestablished on the campus. In 1917 the name of the college was changed to the North Carolina State College of Agriculture and Engineering. The departments of architecture, education, highway engineering, and business administration also were established during Riddick's administration. A number of improvements were made in the physical plant, and new buildings were erected for agricultural extension (Ricks Hall) and mechanical engineering (Page Hall). A fund-raising drive was initiated and construction was begun on the Memorial Tower to honor the alumni who had given their lives in World War I. A student government was formed and two publications were founded: Alumni News and The Technician (student newspaper).

Because of the increased enrollment after the war, President Riddick felt that the administrative organization of the college was inadequate and that a reorganization was essential. After discussions with the board of trustees and the U.S. commissioner of education, it was decided that a survey should be made by an expert in higher education. Dr. George F. Zook of the U.S. Bureau of Education performed the study in March 1923 and later submitted his report. Among his recommendations was that the resident teaching be organized into four main divisions: agriculture, engineering, general sciences, and social sciences and business administration, with a dean in charge of each division. The executive committee of the board of trustees recommended that the board adopt the report with modifications and proceed with the organization of separate schools. Riddick had already advised the trustees that if a School of Engineering was established, he would like to resign the presidency and become dean of engineering. At its meeting on 28 May 1923, the board adopted the general principles of organization outlined in the Zook report, accepted Riddick's resignation, and appointed him first dean of the new School of Engineering.

Riddick organized and for the next fourteen years effectively administered the largest school in the college. On retiring in 1937, he became dean emeritus of engineering and professor of hydraulics. In 1951 the Riddick Engineering Laboratories building was named in his memory.

Riddick had played football at Lehigh University and maintained a lifelong interest in athletics. In 1898 and 1899 he served as football coach at the College of Agriculture and Mechanic Arts, and for many years he was a member of the athletics council. During the 1912–13 football season the college's football stadium was named in his honor.

Riddick was instrumental in organizing the North Carolina Society of Engineers in 1918. He received honorary LL.D. degrees from Wake Forest College and Lehigh University in 1917 and a doctor of engineering degree from North Carolina State in 1939. He died in Baltimore, Md., and was buried in Raleigh's Oakwood Cemetery.