Lemuel Sawyer, writer and politician, was born in Camden County, the youngest of nine children of Lemuel and his first wife, Mary Taylor Sawyer. The elder Sawyer, whose family connections were numerous and affluent, was active in local affairs. His son attended the country schools, then in 1793–96 Flatbush Academy on Long Island. In May 1796 he went to Philadelphia to visit his brother-in-law, Congressman Dempsey Burgess, and quickly succumbed to the elegant living and the genial social life of the city. He studied mathematics briefly at the University of Pennsylvania. The following year Sawyer was back in Camden County, where he had inherited a dilapidated farm. In 1799 he was a student at The University of North Carolina, in 1800 and 1801 he held a seat in the North Carolina House of Commons, and in 1804 he was a presidential elector, casting his vote for Thomas Jefferson and DeWitt Clinton. Also in 1804 he was admitted to the bar and set up a law office in Elizabeth City. In these years, to support his improvident ways, he began to sell his property, first the slaves, then the land.

Sawyer served eight terms in Congress (1807–13, 1817–23, and 1825–29). Twice during this period he ran unsuccessfully and once did not stand for reelection. Though he neglected his duties and often was absent from the sessions because of illness, so attractive and pleasant was his easygoing manner and so widespread and undiminished his personal popularity that he was able to defeat such formidable opponents as William H. Murfree and James Iredell. In Congress he supported the Embargo, championed Arctic exploration, and, ironically, was for rigid government economy. His favorite haunt was the reading room in the Library of Congress. From time to time he returned to North Carolina. 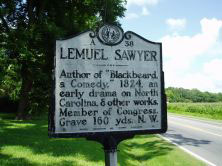 The first of Sawyer's three wives was Sarah Snowden, of Camden County, whom he married in 1810. She died two years later. In 1820 he married, in Washington, D.C., Camilla Wertz, who died in 1826. The three children of these marriages did not survive childhood. His third wife was the wealthy Mrs. Diana Rapalye Fisher, of Brooklyn, whom he married in 1828. He thereafter moved to New York State, where his liberal and spend-thrift nature, extravagant style, and chronic invalidism eventually dissipated his wife's fortune and led to downright poverty. During his last two years he held a minor clerkship in Washington, where he died. Family tradition holds that he was buried in an unmarked grave beside his brother Enoch at Lambs Ferry in Camden County. In 1954 a marker was erected at the spot.

Sawyer's literary productions, like the books he chose to read, were quite diversified. First to be published was the now-lost Journal to Lake Drummond (ca. 1797), concerning which David L. Swain commented: "The events are without interest, the remarks puerile, and the language the most superlative bombast." Also lost are three unpublished manuscripts: "Essays Literary, Political, and Dramatic" (ca. 1805), a "Roman History" (ca. 1822), and a work on "Greek Literature" (late 1840s). His four-act comedy Blackbeard (1824), the first play by a native North Carolinian as well as the first to use North Carolina scenes and North Carolina characters, is a mixture of low farce and flowery melodrama. Neither of its two plots has to do with the famous pirate: instead, Sawyer deals, first, with a group of gullible rustics who in 1823 are intent on recovering Blackbeard's buried treasure and, second, with a disreputable crowd of corrupt Currituck County politicians. The play was sold by subscription to members of Congress, and so delighted was Sawyer with the financial reward that he immediately brought out another play, The Wreck of Honor (1824). One of its two plots follows the amorous adventures of an American in Paris, while the other, in blank verse, is a drama of seduction and murder, including a scene at the Battle of Waterloo. Neither play has ever been staged.

Quite a different sort of literary effort is The Observatory (1833), advocating a national observatory in Washington for the purpose of spreading scientific knowledge. In A Biography of John Randolph of Roanoke (1844), Sawyer's congressional colleague is portrayed as a coward, a mountebank, and a quarrelsome and egotistical numskull. Poorly organized and hastily put together, it was, according to reviewers at the time, false, scandalous, malicious, and libelous. Even so, his book on Randolph is no more scathing than the Auto-Biography of Lemuel Sawyer (1844), a frank disclosure of his gambling, wastefulness, dissipation, chicanery, and tawdry love affairs. This book must be one of the most self-condemning documents in all American letters. His last publication was "The Vine of North Carolina," included in Report of the Commissioner of Patents (1849), where Sawyer encourages the growing of scuppernongs in northeastern North Carolina to promote the commercial production of wine. Though once ascribed to him, the novel Printz Hall (1839) is now known not to be by Sawyer.