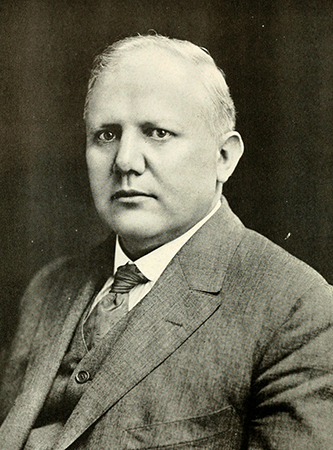 Henry Fries Shaffner, banker, industrialist, and civic and church leader, was born in Salem, the son of Dr. John Francis and Caroline Louisa Fries Shaffner. He was educated in the Boys' School of the Moravian church and at The University of North Carolina, from which he was graduated in 1887 with a Ph.B. degree. His marriage to Agnes G. Siewers, which took place on 21 Nov. 1901, produced five children: Henry Siewers, who died in infancy, Eleanor Caroline (Mrs. R. E. Guthrie), Anna Pauline (Mrs. R. S. Slye), Emil Nathaniel, and Louis DeSchweinitz.

For several years following college Shaffner worked in his father's drug business, operated the pottery that had been established by his grandfather, and was involved in the tobacco business. In 1893 he and his uncle, Colonel F. H. Fries, organized the Wachovia Loan and Trust Company. Shaffner served as its secretary and treasurer until 1911, when the company was merged with the Wachovia National Bank to form the Wachovia Bank and Trust Company. He was vice-president of Wachovia Bank and Trust Company in Winston-Salem from 1911 to 1931 and chairman of its board of directors from 1931 to 1941. He was also president of Winston-Salem Building and Loan Association, president of Briggs-Shaffner Company, and a director of Oakdale Cotton Mills.