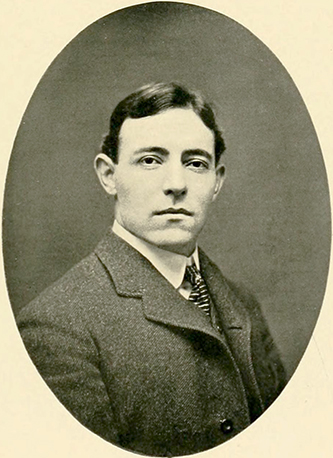 George Stephens, civic and business leader, was born in Guilford County, the only child of Addison H., a Confederate veteran, and Lydia Lambeth Stephens. After attending Oak Ridge Institute, he was graduated from The University of North Carolina in 1896. As an outstanding athlete who had taken a course at the Springfield College of Physical Education, he was able to earn his way through college as a physical education instructor. In 1903 the university annual was dedicated to Stephens in recognition of his contributions as a devoted alumnus. In the same year he was appointed a trustee, and in 1937 he was elected president of the Alumni Association. As a trustee until his death, he served on many important committees, including search committees for the selection of a new president and building committees during a period of rapid physical expansion.

After graduation Stephens settled in Charlotte and helped to organize an insurance company. In 1901 he established the Southern States Trust Company (later the American Trust Company and still later the North Carolina National Bank), of which he became president in 1902. While continuing his banking career, he entered the field of real estate development in 1909 with the opening of Kanuga Club, near Hendersonville, as a summer resort. This was a private club of limited membership, consisting of a group of cottages built around a central clubhouse where members could live or simply have their meals. Through central management of the facility, services and maintenance could be provided at cost. The club was discontinued in 1916 after severe flood damage and became an Episcopal conference center.

In 1912 he formed the Stephens Company to develop Myers Park in Charlotte as a residential area on 1,100 acres that he had bought from his father-in-law, John Springs Myers. Both Kanuga Club and Myers Park showed his great love of natural beauty by the efforts he made to preserve and enhance it. Stephens also appreciated the importance of planning, as indicated when he obtained the services of a professional city planner—one of the first in the country. His concern for conservation and for making areas available for the enjoyment of natural beauty, as well as for recreation, was shown by his organization of the Charlotte Park and Tree Commission and by his role as one of the leaders who acquired land for Independence Park in Charlotte. Many years later he was part of a group that helped persuade the federal government to locate the Blue Ridge Parkway in the western part of the state.

Stephens was a director of the Charlotte YMCA for many years and of the North Carolina and South Carolina Interstate Committee of that organization. He also was one of the organizers of the club that later became the Charlotte Country Club. During World War I he helped to influence the location of Camp Greene near Charlotte, and he was chairman of the Liberty Loan bond campaigns during and after the war. From 1912 to 1916 he was part owner and publisher of the Charlotte Observer.

In 1919 Stephens moved to Asheville, where he became copublisher of the Asheville Citizen, which he owned with Charles A. Webb until 1930. In addition, he bought Biltmore Village from the George Vanderbilt estate for resale to individual purchasers. In 1939 he became president of the Beverly Hills Company for the development of a large suburban tract. Stephens was the first chairman of the Asheville City Planning Commission.

He was a member of the Episcopal church and of the Democratic party. In 1943 a group of Charlotte friends commissioned a portrait to be painted as part of the permanent collection of the Mint Museum. On the frame is the inscription: "Portrait of George Stephens, first in the building of modern Charlotte."

On his death in Asheville, he was survived by his widow, Sophie Convere Myers Stephens, of Charlotte, whom he had married on 9 Dec. 1902. He also left two children, George Myers and Sophie Stephens Martin, and seven grandchildren. He was buried at Calvary Episcopal Church in Fletcher.