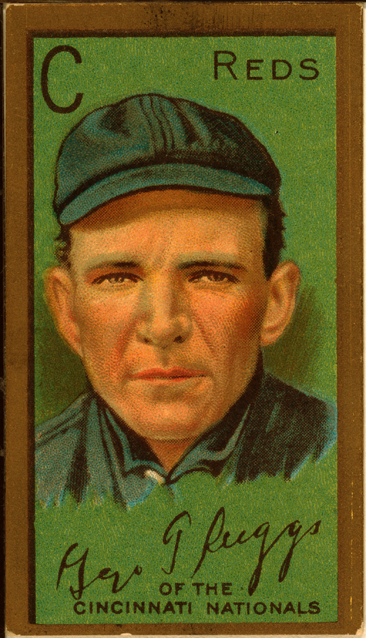 George Franklin Suggs, professional baseball player, was the first North Carolina–born major league star of the modern era. Born and raised in Kinston, he was the son of John and Winifred Aldridge Suggs. He was educated locally and later attended Oak Ridge Academy.

From 1904 to 1907 Suggs played minor league ball in Jacksonville, Fla., and Memphis, Tenn. In 1908 his contract was purchased by the American League Detroit Tigers, but the Tigers used the young righthander sparingly. That year he pitched in only six games with one win and no losses. He started the next season with Detroit, compiling a 1–3 record in nine games. His contract was then purchased by Mobile of the Southern League, where he finished the season.

After the 1909 season his contract was purchased by the Cincinnati Reds of the National League. Given the chance to pitch, Suggs became one of the outstanding pitchers in the league. Only five feet, seven inches tall, he was a finesse pitcher, with unusually good control and a fortunate facility for picking runners off base. In 1910 he won 18 games against only 11 losses, with a superb earned run average (ERA) of 2.40, and the best walk-perinning ratio in the league. In 1911 he won 15 games against 13 losses, with an ERA of 3.00. In 1912, still with Cincinnati, he was 19–16 with a 2.94 ERA. That year he finished among the league leaders in complete games, shutouts, and fewest walks allowed per inning.

In 1913 Suggs slumped to 8–15 for the seventh-place Reds, and after the season his contract was sold to the St. Louis Cardinals. Miffed by this treatment he elected to jump to the Baltimore franchise of the new Federal League, a short-lived attempt to form a third major league. Suggs was one of the league's standouts in 1914, winning 25 games and losing only 12, with a 2.90 earned run average in 319 innings. He finished that season in the league's top five in wins, winning percentage, complete games, shutouts, and fewest walks allowed per inning. The next year Suggs was a deceptive 13–17 for a lastplace Baltimore team, which lost almost 70 percent of its games.

The Federal League folded after the 1915 season. Although some of its players were welcomed back to the National and American leagues, Suggs never played in the majors again. After spending the 1916 season in the minor leagues in Raleigh, he retired from baseball. He finished his major league career with a record of 100 wins against 88 losses, a record compiled with generally mediocre teams.

Suggs returned to Kinston and for several years operated a sporting goods store. He was later associated for two decades with the E. V. Webb Tobacco Company, first as a storage house manager and then as a factory foreman.

Suggs and his wife Mozelle Cox had no children. He died in Kinston and was buried at the First Baptist Church.