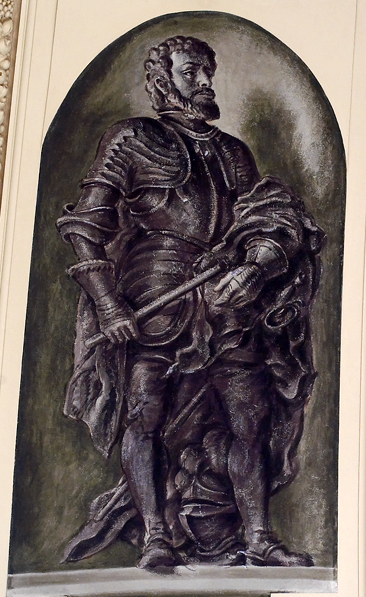 Giovanni Da Verrazano (Variant: Verrazzano), Florentine navigator, was born of noble parentage at his family villa in Tuscany, about 30 miles south of Florence. About 1506 he went to Dieppe, France, to pursue a maritime career. There is evidence that he sailed to Newfoundland in 1508 and later made trading voyages to the eastern Mediterranean.

In 1523 a group of Florentine bankers and merchants residing in Lyons, inspired by the riches accruing to Portugal from Asia, persuaded Francis I of France to lend royal patronage and a 100-ton royal ship, La Dauphine, to a western venture to explore north of the Spanish New World settlements in search of Cathay. The La Dauphine and three private vessels were outfitted by Jean Ango at Dieppe for an eight-month voyage, and Verrazano was chosen to command them.

That autumn, the fleet set out from Dieppe. Shortly afterwards, a storm destroyed two of the ships and forced Verrazano to put into a Breton port for repairs to La Dauphine and his remaining private ship. He then sailed south to Portuguese Maderia, taking Spanish prizes en route. There, he sent his second vessel back to France with the prizes and continued across the Atlantic in the La Dauphine.

About 1 Mar. 1524 he made landfall in the vicinity of Cape Fear. From there, according to him, he sailed south about 110 nautical miles to Florida, then returned to Cape Fear "in order not to meet with the Spaniards." In fact, he apparently turned back somewhere north of Charleston, as he also stated that he had been unable to find a suitable anchorage en route. From Cape Fear, he sailed north, making two or more landings between there and Cape Hatteras, visiting with the natives, whom he found friendly, and examining the flora and fauna of the land. Observing Pamlico Sound, he determined that this was not Asia but a new land, and the sound was the Pacific Ocean.

After spending about a month on the Carolina coast, he sailed north to New Jersey, New York, New England, Newfoundland, and back to France. On his return, he found the king preparing for war in Italy and his other backers unimpressed with the plants and mineral samples he brought. He thus was left without backers for a second venture.

Finally, in 1527 he persuaded Jean Ango and a high French nobleman to support him and he set forth again. This venture, beset with storms and mutiny, failed to reach North America, sailing instead to Brazil, and returned with a cargo of "Brazil wood," valued for making dye. In the spring of 1528 he sailed a third time for the New World. Taking a more southerly course, he made landfall in the Lesser Antilles. Mistaking the natives to be friendly as they had been in Carolina, he went ashore and was killed by the hostile Carib Indians.

During his North American voyage of 1524, Verrazano compiled a description of the lands and people he found and drew a map of the coastline. The account of the voyage was sent by him in a letter to Francis I, a copy of which was later obtained and translated into English by Richard Hakluyt. A copy of his map was given to King Henry VIII of England, apparently during the time the navigator was searching for a backer for his second voyage. This later came into the possession of John Lok, a London merchant, who like Hakluyt, was among the foremost proponents of English western expansion. Both of these documents were used in the planning and promoting of the English colonial movement that led to the colonies planted on Roanoke Island.

Verrazano in 1524 was probably the first European to sail the coast of North America. His map and account of his findings comprise the earliest description of the land and people of North Carolina and pioneered the way towards the eventual European settlement of North America.