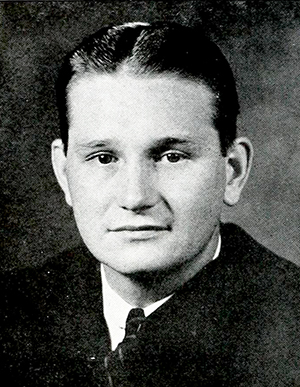 John Rushing Welsh, III, teacher, administrator, and scholar in the field of southern letters, was born in Monroe, the son of John R., Jr., and Hallie Hamilton Benton Welsh. He received an A.B. degree from the University of the South in 1939 and a master's degree from Syracuse University in 1941, the year he married Ruth Elizabeth Davis on 9 August. From 1941 to 1942 he was head of the Department of English of the Linsly Institute in Wheeling, W.Va., before serving as a captain in the U.S. Army, Pacific theater, where he was often under enemy fire.

In 1946 he became adjunct professor of English at the University of South Carolina, a post he held until 1947 and again from 1949 to 1951. In 1951 he received a Ph.D. from Vanderbilt University with a dissertation on "The Mind of William Gilmore Simms: His Social and Political Thought," a summary of which was published by the Vanderbilt Joint University Library (1952). At Vanderbilt, Welsh was much influenced by the Fugitive poets and developed a close friendship with Donald Davidson of that group. In 1951 he was appointed associate professor of English at South Carolina, where he became a full professor in 1960. In 1958 Welsh was co-recipient of the USC Russell Award for Distinguished Teaching, and in 1963 he won the Wingate College Alumni Achievement Award.

Divorced in September 1962, he married Sevena Molair of Barnwell, S.C., on 20 Dec. 1963. In 1973 he was named head of the University of South Carolina English Department, and in 1974 he became the first vice-president for instruction at the university. At the time of his death he was serving as director of the university's Educational Foundation, a post he had held since the foundation was established in 1958; as associate editor of the South Atlantic Bulletin since 1969; as a member of the editorial board for the Centennial Edition of the Writings of William Gilmore Simms, University of South Carolina Press; and as a member of the Presbyterian College Board of Visitors.

Welsh was a member of the Modern Language Association and the Society for the Study of Southern Literature, as well as Blue Key, Phi Beta Kappa, Pi Gamma Mu, and the South Caroliniana Society. At South Carolina he served as faculty secretary (1964–70), secretary to the faculty senate (1970–73), president of the Faculty Club, and president of the campus chapters of Phi Beta Kappa and the American Association of University Professors. Among his publications are "Egdon Heath Revisited—Glasgow's Barren Ground" in Reality and Myth: Essays in American Literature (1963), John Esten Cooke's Auto-biographical Memo (1969), and numerous articles in scholarly journals such as the Journal of American Studies and the Journal of Southern History. A partial list of his publications may be found in the card catalogue of the university's South Caroliniana Library.

Welsh died suddenly in Columbia, S.C. He was survived by his wife; his two children from his first marriage, Nancy Benton and John R., IV; and an adopted son, William L. He was buried in Monroe City Cemetery, Monroe, N.C.

Welsh was perhaps best known for his easy familiarity and rapport with students. In an unsigned eulogy in the student newspaper, he was judged "an anachronistic and very human man," one of the last of the sort known as the "Southern gentleman," an appellation that, "according to the values of a romanticized age" which Welsh represented, "characterized the finest qualities attainable by man." In tribute to his long years of service to the University of South Carolina, the building housing the English Department was renamed the John R. Welsh Building.