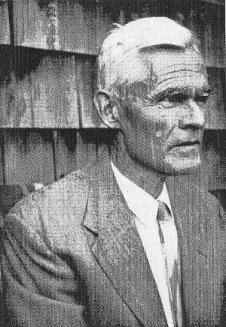 Rassie Everton Wicker, land surveyor and local historian, was born near Cameron at Hall's Planer in Moore County, the son of James A. and Lucretia Millis Wicker. He attended the Cameron School and entered the Agricultural and Mechanical College in Raleigh in 1910. When elected surveyor of Moore County in 1912 he left college and, except for a few brief intervals, worked as a surveyor for the remainder of his life. In time he was licensed as a civil engineer.

In 1918 Wicker enlisted in the U.S. Army and served overseas with the Fifty-sixth Pioneer Infantry in the Meuse-Argonne offensive. Returning home to Pinehurst he worked with Pinehurst, Inc., where he headed all local civil and landscape engineering for many years with the exception of a period during World War II when he was draftsman and plant engineer at the General Machinery and Foundry Company in Sanford.

Although he was a man of many talents and interests, his main love was for Moore County and its history. It is said that he measured and mapped most of Moore and was an authority on it, describing the geography of the county as a surveyor and the traditions of its people as a historian. He was an organizing member of the North Carolina Society of County Historians and served as its president. Wicker rendered the same service to the Moore County Historical Society. He frequently took interested persons on long hikes to points of interest in the Sandhills, and with Paul Green and Phillips Russell of Chapel Hill he searched out sites of early Highland Scots homes, including the residence of Flora MacDonald and graves of her children. His monumental work on land deeds, grants, will books, court records, and Revolutionary data was published by the county historical society in 1971. He also wrote The Home of Flora MacDonald in North Carolina and Owners and Occupants of the House in the Horseshoe on Deep River. In addition to his interest in local history, Wicker was an amateur astronomer, musician, botanist, mathematician, and master craftsman. He designed and made over fifty pieces of furniture, including three grandfather clocks.

On 13 June 1917 he married Mary Loving of Cameron, and they had a daughter and a son. A lifelong Presbyterian, he was buried at Old Bethesda Cemetery, Aberdeen.

Beth Cadiau, "Curiosity of Rassie E. Wicker," an undated clipping from the Southern Pines Pilot in possession of Katharine Melvin.

I thought it was interesting

I thought it was interesting that the write up on Mr. Wicker mentions the graves of Flora MacDonald's children. Mr. Wicker wrote, I believe quite correctly, that the graves in question were not those of children of Flora. Flora's children were well known in the public record and did not die in North Carolina.