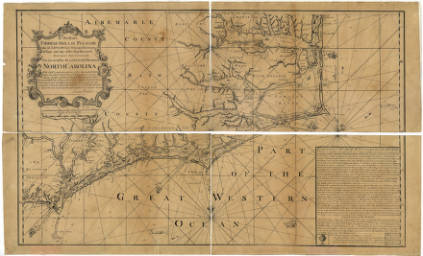 James Wimble, mariner, trader, distiller, landowner, and privateer, was a Carolina chart maker and the cofounder of Wilmington. Baptized on 31 Jan. 1696, he was born on the Sussex coast near Hastings, the sixth of ten children of James and Anne Wimble. Trained as a seaman, he built a small ship in which he sailed for the West Indies in 1718; with New Providence, the Bahamas, as a base, Captain Wimble was soon trading with the mainland. Evidently prospering, he acquired land in New Providence, in North Carolina, and in Boston. On 26 Mar. 1724 he married Rebecca Waters, the daughter of a substantial Boston citizen; James, the first of their several children, was born on 20 Dec. 1724. Wimble described himself variously in local deeds as a distiller, a mariner, and an innholder of Boston, but he continued a profitable trade with voyages to the West Indies and the Carolinas.

His activities in North Carolina prospered rapidly before disaster struck. In 1730 he became sole owner of a new brigantine, apparently built that year on the Cape Fear, which he named Rebecca after his wife. Of 128 tons burden, with a 54-foot keel and a 21-foot beam, she mounted ten guns with a crew of fourteen. Running into a violent storm on a 1731 voyage from Cape Fear to Boston, he was driven south and eventually reached New Providence in the Bahamas. There Governor Woodes Rogers illegally retained his papers and forced him to transport workers to the salt ponds. The ship was wrecked and lost in another storm. Wimble had to sell his slaves and even his Carolina lands before finding a passage from New Providence to Newport, R.I., which he reached on 10 Oct. 1732. He never recovered his losses, though he appealed repeatedly to the Board of Trade and Plantations in London for justice and redress.

With astonishing resilience, Wimble returned to North Carolina early in 1733, bought land on the Cape Fear River, sold lots, and became a cofounder with three others of a new settlement on the Cape Fear. Variously called New Carthage, New Liverpool, and Newton, it received in 1734 the support of the new governor, Gabriel Johnston, who named it Wilmington after his patron.

At the same time Wimble drew a crude but detailed and fairly accurate chart of the North Carolina coast, dated 16 Apr. 1733 (now in the Bodleian Library). Calling it "A Large and aisect [exact] Drafe. . . . By James Wimble wo as yausd [who has used] the Coast and trad this 12 yeare past," he sent the chart to William Mount, the publisher of the English Pilot. Mount may have been put off by the map's crudeness and its spelling, for not until 1738 did Mount and Page publish an improved version of Wimble's "North Carolina." This chart of the coast, the sounds, with soundings, inner passageways, and property owners, is dedicated to Thomas Pelham, the Duke of Newcastle and Secretary of State, the patron of Wimble and his relatives in Sussex, whom Wimble addressed as "The Duck of N. Castell." Wimble's work, with its hydrographic and topographical information, remained in spite of inaccuracies the best coastal chart of the region until the end of the century. On it "Wimble Shoals," north of Hatteras, is still a coastal landmark; "Wimblton Castel," which once rose on the high bluff near present Nun and Front Streets in Wilmington, stood against possible pirates and Spanish marauders.

How many vessels Wimble lost by storm and shipwreck is unknown, but the escalating War of Jenkins' Ear brought other misfortunes. In 1735 Captain Wimble wrote Newcastle that "Spanyords have takeing me 7 times." He attempted to retrieve his losses by turning to privateering. In April 1742 a chain shot from a Spanish ship that he was chasing in The Rose tore off his left arm, and he lost his ship. He lost another privateer, The Revenge, off Cuba two years later. Thereafter was silence; the life of a mariner and privateer was uncertain.

Is it possible to get a copy

Is it possible to get a copy of James Wimble's chart of His Majesty Province of North Carolina?
Thank you!

The copy of Wimble's chart

The copy of Wimble's chart included in the NC Maps on line web site is actually a mid 19th century lithographic facsimile. A beautiful example of an original in the John Carter Brown Library is viewable here: https://jcb.lunaimaging.com/luna/servlet/s/pn2b15
There are options to download the image with variable degrees of resolution, including "Extra-extra large".
Another digitized original is in the Biblioteca Nacional de España:
http://bdh-rd.bne.es/viewer.vm?id=0000149377

Thank you taking the time to visit NCpedia and posting a comment.  UNC’s North Carolina Map Collection has a copy of James Wimble’s chart at: https://tinyurl.com/ycyo9txg.

I hope you find this helpful.