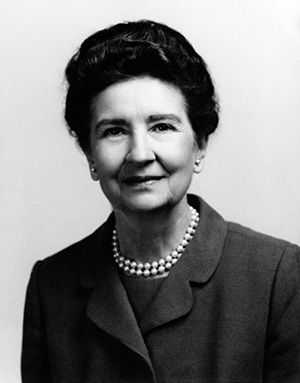 Ellen Black Winston, social worker, was born in Bryson City, the daughter of Stanley Warren and Marianna Fischer Black. She was graduated from Converse College, Spartanburg, S.C., in 1924 and received M.A. and Ph.D. degrees in sociology from the University of Chicago in 1928 and 1930, respectively. She was awarded five honorary doctoral degrees including those from The University of North Carolina and Duke University.

Mrs. Winston was a teacher of social science, the dean of girls, and the director of guidance in the Raleigh high schools from 1928 to 1934 and editor of technical publications on public relief in the Division of Research of the Works Progress Administration, Washington, D.C., from 1934 to 1939. She was chairman of the department of sociology and economics at Meredith College from 1940 to 1944, when she was appointed North Carolina commissioner of public welfare, a post she filled until 1963. During those years she served on numerous commissions and boards and in an advisory capacity to both state and national agencies.

In 1963 she began a four-year term as U.S. commissioner of welfare in the U.S. Department of Health, Education, and Welfare. She also was chairman of the Governor's Coordinating Commission on Aging (1956–63) and chairman or cochairman of the North Carolina White House Conference on Aging (1961, 1971, and 1981). In addition, Mrs. Winston served on the board of directors of such agencies as the International Council for Home Helps, Council on Social Work Education, North Carolina Conference for Social Service, Child Welfare League of America, and American Public Welfare Association, of which she was also president.

She was the American editor of Nation and Family (1941) and of a series of rural monographs for Works Projects administrators, a collaborator in the publication of The Negro's Share (1943), and coauthor of Seven Lean Years (1939), The Plantation South (1940), and Foundations of American Population Policy (1940). She wrote numerous professional articles.

Her husband was Sanford R. Winston, professor of sociology at North Carolina State College. They were married in 1928 but had no children. At her death memorial services were held at Meredith College with graveside services in Bryson City.