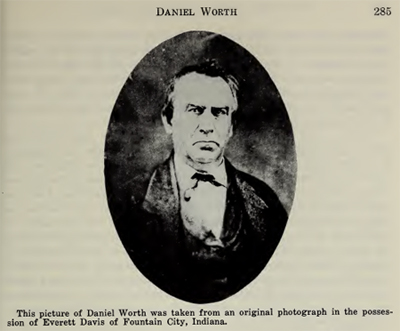 Daniel Worth, missionary and Abolitionist, the son of Job and Rhoda Macy Worth, was born in the Old Center Quaker community of Guilford County. Although a member of the Methodist church, he probably received his formal education from the Friends who constructed the first schoolhouse in southwestern Guilford County where Levi Coffin taught for several years during the period Worth would have been of school age. Coffin later became the chief engineer of the Underground Railroad.

In 1840 Worth became the first president of the first State Anti-Slavery Society of Indiana. In 1842 he joined the Wesleyan Methodist church, and in September 1843 he was licensed to preach in that denomination. He became president of its General Conference in 1848 at the annual meeting in New York.

Politically Worth was anti-Jacksonian, supported the Liberty party in 1844 and the Free-Soil party in 1848, and then became a Republican. In 1844 and 1848 he lost his bid to serve as a presidential elector, and in 1845 he lost a race for Congress as well as for the state senate.

From Indiana he moved to Ohio in 1850 and on to Kentucky in 1853 to continue his antislavery work. Two years later he was back in Ohio as the pastor of a church with sixty to seventy former slaves who had escaped through the Underground Railroad. In 1856 he once again returned to Indiana as president of his church in that state.

After some doctrinal disagreements with several of the younger members of the Indiana Conference, Worth decided to return to North Carolina in the fall of 1857 as a missionary. It is unclear whether he was working for the Wesleyan Methodist church or the American Missionary Association. The latter group provided him with fifty copies of Hinton Rowan Helper's antislavery book, The Impending Crisis of the South: How to Meet It, as well as antislavery tracts to be distributed in North Carolina. Helper was also a native of North Carolina, and historians have described his book as "probably the most caustic, scathing, and vituperative criticism of slavery and slaveholders ever written."

Worth preached his first sermon in New Salem, Randolph County, N.C., on 8 Nov. 1857, to a "large and attentive congregation." For the next two years he continued to preach and distribute antislavery literature in an area of the state with a small slave population.

Finally, after many of the state's newspapers campaigned against him for being an Abolitionist, Worth was arrested on 22 Dec. 1859 by the sheriff of Guilford County for circulating incendiary material against slavery. Under the statute, this offense was punishable by one year in prison, and, at the discretion of the court, a whipping might be added. Worth was first tried and subsequently convicted on 30 Mar. 1860 in Asheboro and sentenced to twelve months in jail, but the court omitted the whipping. He appealed his conviction. His second trial was held in Greensboro on 27 April. It took the jury only fifteen minutes to return a verdict of guilty. Again he was sentenced to prison for a year. However, he was permitted to appeal to the North Carolina Supreme Court and was released on a $3,000 bond. Worth forfeited the bond and escaped in a closed carriage to Virginia, where he boarded a train for New York. Arriving on 5 May, he announced that he had been permitted to escape from the "den of slavery." The next day, Sunday, 6 May, he began a series of speaking engagements to raise money to pay his bond in North Carolina. His first stop was Henry Ward Beecher's church, where Beecher declared that he was unworthy so much as to unfasten Worth's shoes. Soon afterwards the North Carolina Supreme Court upheld the Guilford County Superior Court's verdict in Worth's case, and by 6 August Worth had raised all the money to pay his bondsmen for their loss; the sum included a $50 donation from Hinton Rowan Helper.

Worth returned to Indiana and later was elected president of the Indiana Conference of the Wesleyan Methodist church, a post he retained for the few remaining months of his life.

Before leaving North Carolina as a young man, Worth was married in 1818 to Elizabeth Swain, by whom he was the father of eight children. She died in 1858, and the following year he married Huldah Cude. Worth died in Fountain City, Wayne County, Ind.

A Biographical Directory of the Indiana General Assembly (1980).