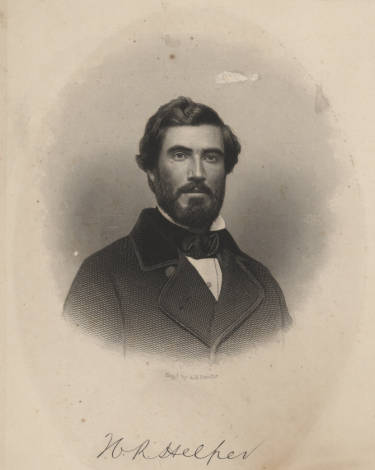 Hinton Rowan Helper, abolitionist author and lecturer and consul to Argentina, was born on the Squire Boone homesite two miles west of Mocksville, the son of Daniel J. and Sarah Brown Helper. He was educated at the Mocksville Academy taught by Peter Stuart Ney and the Reverend Baxter Clegg. Graduating in 1848, he was apprenticed to a printer, Michael Brown, of Salisbury.

In 1850 Helper went to the California gold fields but failed as a prospector; according to his own account, he worked one mine claim for three months and made 93 3/4 cents. The California experience, however, provided material for his first book, California Land of Gold: Reality vs. Fiction. Published in 1855, it presented a most unfavorable view of California and its potential, consisting largely of fabricated and garbled statistics intended to serve the purpose of the writer. In this volume Helper praised and advocated the extension of slavery, and scolded "meddling abolitionists."

Helper returned to Salisbury and then moved to New York. In June 1857 he published The Impending Crisis of the South: How to Meet It, a work destined to help elect Abraham Lincoln president in 1860 and to rank perhaps next to Uncle Tom's Cabin in its impact as an abolitionist document fueling the fires of secession and war. Helper, scorned by proslavery elements in the North, unable to find employment, and harassed and threatened with physical harm, applied to Lincoln for a consular appointment. The request was granted and in November 1861 he was sent to Buenos Aires. While there he married Maria Louisa Rodriquez.

In 1867 Helper settled in Asheville. He was described at this time as a "tall, strongly built man . . . and always alone." Despite the former Southern hatred and threats against his life, he was not molested in any way. He later lived in New York, St. Louis, and Washington, D.C.

Helper wrote five other books, three of which were extremely racist and unleashed intense hatred towards the Negro race. His writings contained rational, progressive, and farsighted viewpoints and ideas as well as irrationalities and illogical ideas which sometimes sounded like the ravings of a maniac. Historians John Spencer Bassett and J. G. de R. Hamilton have portrayed him as a man of keen intellect with a touch of genius which at times bordered on insanity. The Louisville Courier Journal once described him as having "an expression of unmistakable resolution written all over his countenance and an air of manifest sincerity in his every utterance." 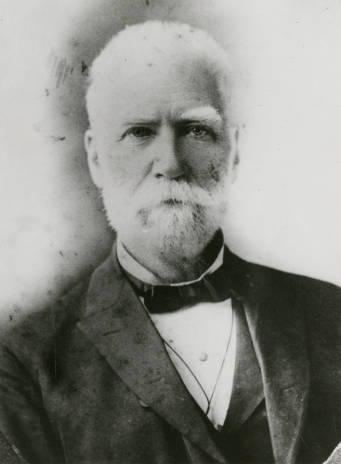 After about 1890 Helper spent most of his time in Washington, D.C. His wife became blind and returned to South America with their son. Helper's mental instability worsened and he eventually committed suicide. His burial plot was donated, and the burial expenses were paid by the Authors Society of New York. His grave is unmarked.

When he died, the Courier Journal wrote: "The world had wrestled with him and thrown him. His mind was shattered and his heart broken. Friendless, penniless, and alone, he took his own life, and died at the age of eighty—this man who had shaken the Republic from center to circumference and who at a critical period had held and filled the center of the stage."

Helper and The Impending Crisis indeed "had shaken the Republic from center to circumference." Though he said that the book was intended to help the nonslave-holding whites (three-fourths of the South's population disadvantaged by slavery), it was, in reality, a powerful and dangerous abolitionist work. The 150 pages of statistics from the census of 1850, indiscriminately used to show that the slave states were at a disadvantage in every area of comparison with the free states, had little influence. The real impact of the book came from its scathing denunciation of Southern slave owners, whom the author branded as "robbers, thieves, ruffians, and murderers," and the admonishment to the slave to gain freedom by violence if necessary.

Republican party leaders endorsed the printing of a compendium of the book for distribution in the presidential campaign of 1860. This endorsement led to the "Speakership Flight" in the House of Representatives between 5 Dec. 1859 and 1 Feb. 1860. The debate there about The Impending Crisis and the Republican party's endorsement of it gave the book nationwide recognition far out of proportion to its merit. Southern states passed stringent laws against the circulation of abolitionist literature, and persons were punished for possessing the Helper volume.

Hinton Rowan Helper and The Impending Crisis shaped history. Historian James Ford Rhodes wrote that the book "proved a potent Republican document especially in the doubtful states of New Jersey, Pennsylvania, Indiana, and Illinois, where it was easier to arouse sympathy for the degraded white than for the oppressed Negro." James Gordon Bennett, editor of the New York Herald, reportedly handed a copy to President James Buchanan in the summer of 1857 with the statement: "There is gunpowder enough in that book to blow the Union to the devil." In January 1861 the Herald declared that Lincoln's election had been due to "this very work of Mr. Helper, and kindred speeches and documents."

"Hinton Rowan Helper and The Impending Crisis " (M.A. thesis, University of North Carolina, 1949). The St. Louis (Mo.) Mercantile Library Association has a collection of Helper's books and pamphlets including his personal copy of The Impending Crisis with his marginal notes.

Hinton Rowan Helper on the Impending Crisis of the South. Digital History: http://www.digitalhistory.uh.edu/disp_textbook.cfm?smtID=3&psid=274