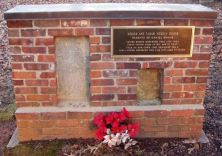 Squire Boone, pioneer settler in Western Piedmont North Carolina and father of Daniel Boone, was born in Devonshire, England. His father was George Boone III; his mother was Mary Milton Maugridge. The family were members of the Society of Friends. George and Sarah Boone immigrated to Pennsylvania in 1717; their son, Squire, and another son and daughter had probably preceded them.

In 1720, Squire Boone married Sarah Morgan and moved to Bucks County, Pa., where he worked as a weaver, blacksmith, and farmer. In 1730 he and his wife purchased 250 acres in Oley Township, in present Berks County, Pa. Nine of their eleven children were born there, including Daniel in 1734. Boone was a trustee and overseer of the Oley Meeting.

On 11 Apr. 1750, Squire and Sarah Boone sold their 158-acre farm, and on 1 May 1750, they set out for North Carolina. Several factors seem to have influenced the move. The oldest children, Sarah and Israel, "married out," that is, married non-Quakers, and Boone was reprimanded by the church for allowing the marriages. The Boones were acquainted with the Morgan Bryan family, and with the Willcocksons, Grants, and others who migrated to the Yadkin River. A son, Jonathan Boone, had married Mary Carter, daughter of James Carter, founder of Salisbury, and had settled in the fork of the Yadkin and South Yadkin rivers in southern Davie County. Too, there was fertile and cheap land and abundant game available in North Carolina. Although Sarah Boone brought a certificate "to Friends in Virginia, Carolina and elsewhere," there is no evidence that the Boones united with a Quaker meeting; several became Baptists.

The Boone family may have "stopped over" in Virginia for perhaps a year or more, a frequent practice of migrating families. Squire Boone probably reached the Yadkin River in late 1751 or early 1752 and may have lived first at the site of Boone's Cave in Davidson County. A cave is there today on a high bluff well above the Yadkin River, and a replica cabin has been built at the site. One tradition holds that the Boones used this cave for shelter while building their cabin; by another the cabin was a fishing and hunting cabin used by the family. There are no known deed records to prove ownership by Squire or Daniel Boone to any land in Davidson County.

On 13 Apr. 1753, Boone received from Lord Granville a grant of "640 acres on South side of Grants otherwise Licking Creek." Sixteen known deeds drawn between 1753 and 1832 designate tracts of land on the present Elisha (formerly Grants or Licking) Creek and Dutchman Creek, in Davie County, as adjoining the Squire Boone grant or containing parts of it. A map based on research of deeds and grants from Mocksville eastward locates the 640-acre Boone grant at the confluence of Elisha and Dutchman creeks. The tract was on the west side of Dutchman, and most of it was on the south side of Elisha—one small part is across the creek. This is the property that Squire and Sarah Boone conveyed to Squire, Jr., on 12 Oct. 1759 and that was sold by him to Henry Baker and John Felker in Sept. 1767.

On 29 Dec. 1753, Boone received another Granville grant of 640 acres on both sides of Bear Creek. The tract, designated as in the Parish of St. Luke's, Rowan County, is two miles west of Mocksville in Davie County. On 12 Oct. 1759, Squire and Sarah Boone conveyed this land to Daniel Boone. In a deed dated 21 Feb. 1764, Daniel and Rebecca Bryan Boone sold their 640 acres on "Bair Creek" to Aaron Van Cleve. Subsequent deeds unmistakably trace this land to the present owners.

One of the earliest settlers in the Forks of the Yadkin, Squire Boone was prominent in Rowan County, formed in 1753. He was related by marriage to the Bryans, Willcocksons, and James Carter and was acquainted with others from Pennsylvania, Maryland, and Virginia who had migrated to the Yadkin River area and claimed extensive and valuable landholdings. He served as a justice of the first Rowan County Court in June 1753. Court minutes show him to have been a very faithful and active member through the year 1757. He served as a juror and for at least one year secured a license to operate a "Publick House at his own Plantation."

Apparently the danger of Indian raids on the frontier settlements in the Forks of the Yadkin area and westward during the French and Indian War led the Boones to convey their lands to Squire, Jr., and Daniel and move to Maryland in 1759. The Records of the Moravians note that perhaps half the people left the area because the Indians kept the land in terror by robbing and murdering. Too, civil strife, later to become the Regulator movement, was beginning, and resentment was bitter in the back country over the dominance by the east in the government. Extant records suggest the Boones (and Bryans) were not Regulators, but most of their neighbors were.

The fact that Squire and Sarah Boone disposed of their land before they moved to Maryland would strongly indicate that they did not plan to return. However, they did return in the spring of 1762, on horseback, it is said. It is thought that they lived at the Bear Creek site, the property of Daniel Boone. Whether Squire Boone was living there at the time of his death is not known. One record states that he died at his residence at the Buffalo Licks. Both maps and extant records refer to licks on Elisha, Cedar, Buffalo, and Dutchman creeks in the vicinity of the first Squire Boone grant; Daniel had sold the Bear Creek property in February 1764, but Squire, Jr., did not sell the Elisha Creek site until September 1767.

Boone was buried at Joppa Cemetery, then called Burying Ground Ridge, in Mocksville, now on Highway 601. The inscription on the soapstone grave marker reads: "Squire Boone departed this life they sixty ninth year of his age in thay year of our Lord 1765 Geneiary tha 2." Sarah Morgan Boone died twelve years later and was buried beside her husband.