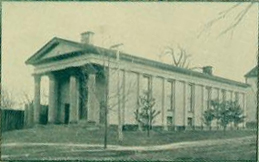 Benjamin Wyche, first fulltime trained librarian at The University of North Carolina, was born in Williamsboro, the son of Benjamin and Sarah Hunter Wyche. He received his early education at Roxboro Academy and Mount Tirzah Academy. From 1889 to 1894 he attended The University of North Carolina, where he earned a B.Litt. degree, and then entered Amherst College for library training.

Wyche was librarian at The University of North Carolina (1894–97), the University of Texas (1897–1903), and Carnegie Library, San Antonio, Tex. (1903–11). He was secretary and then president of the Texas Library Association. Poor health led him to give up his profession, and in 1912 he became a special agent for the New York Life Insurance Company, in Charlotte, where he was an outstanding salesman.

His first wife was Knowlton Woodward, whom he married on 14 Oct. 1897. She died in 1910, and he married Ethel Cheshire Deaver on 14 Sept. 1914. Wyche had a son Benjamin and a daughter Barbara. A member of the Methodist church, he was buried in Riverside Cemetery, Asheville.

Benjamin Wyche is my great

Benjamin Wyche is my great uncle! Interesting information! I grew up in the Mt. Tirzah community in Person County. There was a Readeland Academy, but not aware of a Mt. Tirzah Academy!

Thank you for visiting NCpedia and for sharing your comment. We're glad you found this information about your great uncle!

Benjamin Wyche is my great