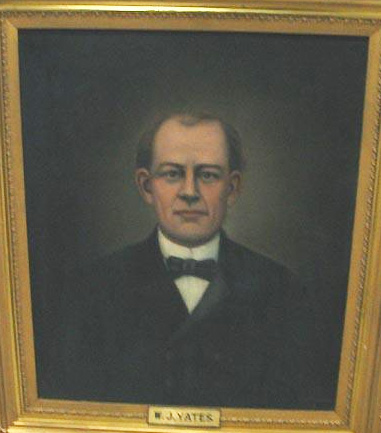 At age thirteen Yates began work as an apprentice in the printing office of the Fayetteville North Carolinian, a Democratic newspaper then published by Hardy L. Holmes, a prominent lawyer. In October 1853 he purchased an interest in the North Carolinian from Robert K. Bryan, and the two men published the paper as joint proprietors until September 1854, when Yates acquired Bryan's interest and became sole proprietor of the journal. In December 1855, citing "impaired health and a large and arduous business," Yates named Josiah Johnson of Sampson County as joint editor and proprietor. In June 1856, again giving poor health as his reason, Yates sold his interest in the North Carolinian to Johnson and moved to Charlotte. The following September he bought the Charlotte Western Democrat from John J. Palmer and became its editor. With the exception of a brief period of retirement in the early 1880s, Yates remained connected with this paper for the rest of his life. The Western Democrat was founded in Charlotte in January 1853 by Robert P. Waring and Rufus M. Herron. Under Yates's ownership it became an effective organ of the Democratic party in the western part of the state. A staunch, lifelong Democrat, Yates made no attempt to conceal his devotion to the party. The Western Democrat appeared without interruption throughout the Civil War; it was the only antebellum North Carolina newspaper that could make that claim.

After the war the paper continued to flourish despite increased competition from other Charlotte newspapers. Yates, who associated himself with the Bourbon or conservative element of the Democratic party, was vitally interested in North Carolina's economic welfare and in the growth and development of Charlotte. In December 1870 he changed the name of his paper from the Western Democrat to the Charlotte Democrat. On 1 Oct. 1881 he sold it to James M. Strong, then owner of the Charlotte Southern Home ; the two papers were then merged into a new publication called the Charlotte Home and Democrat (later the Charlotte Home-Democrat ). Yates retired, but finding himself "unable to stay away" from the printing office, he returned in February 1884 as editor and resumed an active role in the management of the paper until his death. In July 1887—slightly more than a year before he died—the name of the paper was changed back to the Charlotte Democrat. In 1896 James Strong disposed of the Democrat, and it was discontinued the next year.

Although implored by friends and associates to do so, William J. Yates never sought elective office. He was, however, appointed to several state boards and councils by various governors. During the first term of Governor John W. Ellis in 1859–60, Yates was a member of the Council of State. He served on the State Library Board during one term of the Civil War–era administration of Governor Zebulon B. Vance. From 1879 until his death Yates was a trustee of The University of North Carolina, in which he took a lively interest. From 1883 he distinguished himself as a member of the board of the Western North Carolina Insane Asylum at Morganton and at the time of his death was serving as first chairman. Yates was also a member of the state Democratic executive committee in 1884 and a director of two railroad companies. He was a close personal friend and adviser of Governor Vance and a number of other state political leaders.

Long a member of the Tryon Street Methodist Church, Yates was buried in Elmwood Cemetery, Charlotte.