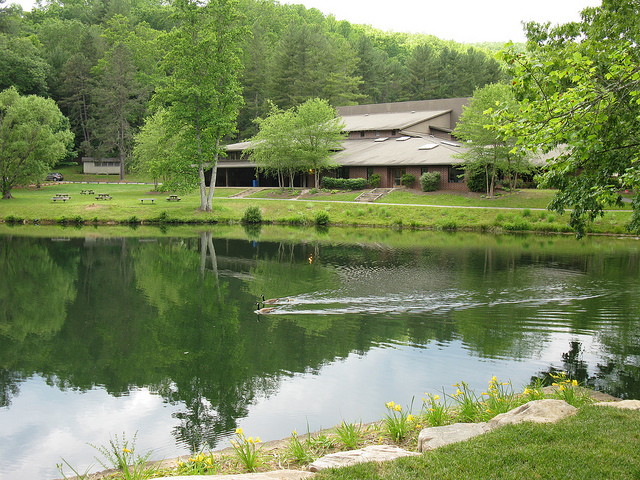 Brevard Music Center, often called the "Summer Music Capital of the South," is the site of an annual festival featuring musicals, operas, symphonies, and choral programs that attracts thousands of people each summer to Brevard, near the Pisgah National Forest in the mountains of Transylvania County. Concurrent with the festival is a summer camp that enrolls 300-400 of the country's best high school and college musicians in a vigorous program of instruction and performance. The center was the brainchild of James Christian Pfohl, the son of a bishop of the Moravian Church, head of the music department at Davidson and Queens Colleges, and conductor of the Charlotte Symphony. Pfohl moved his music camp for boys from Queens College in Charlotte in 1945 to the site of an abandoned boys' camp he had found while vacationing in the North Carolina mountains. The natural beauty of the area, he believed, would form a perfect backdrop for a music camp.He convinced interested Brevard citizens to form the Brevard Music Foundation Festival Association, and in 1946 the association began sponsoring a festival symphony orchestra, with Pfohl conducting.In 1947 the camp, then known as the Transylvania Music Camp, and the association came together to form the Brevard Music Foundation, possibly the first nonprofit organization of its kind.

Under Pfohl's tutelage the festival continued to grow and, in 1955, the name Brevard Music Center was adopted to encompass both the camp and the festival. Over the years, the Brevard Music Festival has featured some of the world's leading performers, such as violinist Isaac Stern, guitarist Carlos Montoya, and soprano Eileen Farrell. By 2006 the 140-acre Brevard Music Center boasted a nationally recognized summer music camp, a 1,600-seat, open-sided concert hall, and a seven-week concert and opera season.