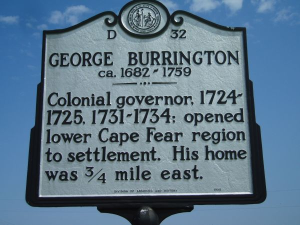 George Burrington (ca. 1682-1759) served North Carolina both as a proprietary governor and as the first royal governor, with the distinction of being removed from office both times. He was born in Devonshire, England and historians believe that he was the son of one of several Gilbert Burringtons alive at the time. Regardless of his parentage, George Burrington was from a prominent family and powerful connections, including the Duke of Newcastle. It was Newcastle who secured Burrington’s initial military commission and, later, his royal governorship. He likely influenced the proprietary appointment, as well. Burrington was likely married but no records have been found to prove this. There is merely a secondhand account of the governor mentioning his “big [bellied] wife” in Virginia. He had a son, George, who was born in 1738.

George Burrington was sworn in as proprietary governor on January 15, 1724, and immediately began to antagonize North Carolina’s political set. Insults, threats and even occasional physical violence were directed toward prominent figures. After a particularly violent episode at Christopher Gale’s house on August 23, 1724, Gale, the Chief Justice, went to England with the support of seven of the councillors to convince the Lords Proprietors to dismiss Burrington. In the summer of 1725 Gale returned to North Carolina, successful in his goal. Burrington likely remained in North Carolina until hearing that his home colony was to come under royal authority. In 1729 Burrington traveled to England to secure the royal governorship.

Burrington was sworn into office as the first royal governor on February 25, 1731. Although he met with initial enthusiasm, he soon managed to alienate even some of his former allies on the council. In May Chief Justice William Smith resigned and traveled to England seeking Burrington’s dismissal. Smith remained there until Newcastle, in the spring of 1733, the decision was made to replace Burrington. His successor, Gabriel Johnston, would not arrive in North Carolina until November 1734.

In his term of almost four years, one fraught with controversy, Burrington nevertheless was able to do some good in North Carolina. He was quite interested in fostering internal improvements, and frequently journeyed through the colony inspecting roads and bridges and helping to plan new roads that would prompt immigration and make travel easier. Burrington was also a key figure in the exploration and development of the lower Cape Fear region. His legacy remains, however, not in the good things that he accomplished, but rather in the conflicts and confrontations. Mystery surrounds several key events in his governorship, including an alleged attempt to murder him, for which no revealing contemporary records exist. Burrington was killed during an apparent robbery attempt on February 22, 1759 in St. James Park, London. In his late seventies, George Burrington struggled with the assailant, but was overpowered and thrown into a canal.