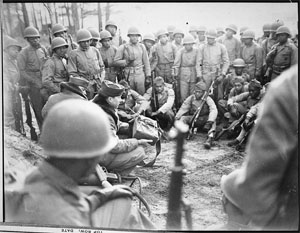 Prior to President Harry Truman’s 1948 Executive Order 9981 to end segregation in the U.S. armed forces, blacks who served did so in segregated units. Although a few blacks had served in the Continental Marines during the Revolution, the U.S. Marine Corps was strictly whites-only in 1941. On June 25, 1941 President Franklin Roosevelt ordered (Executive Order 8802) the full participation of “all persons regardless of color, race, creed, or national origin” in all branches of the military.

The Marine Corps responded by opening, as part of Camp Lejeune, Montford Point Camp on April 26, 1942, specifically for the training of black recruits. At a cost of $750,000, the Corps constructed barracks and support facilities such as a motor pool, chapel, mess hall, steam plant, and recreational area on a 1,600-acre peninsula. In the era of strict segregation, interaction between white and black Marines during training was practically nonexistent. Merchants in Jacksonville locked up their shops when the black Marines were granted their first liberty.

Initially the drill instructors were white but in September 1942, Gilbert H. Johnson (1905-1972) of Gadsden, Alabama, was selected as the first African American D.I. A Navy veteran, Johnson was nicknamed “Hashmark” for the stripes on his sleeve indicating his prior service. Organized at Montford Point Camp were the 51st and 52nd Defense Battalions, which were dispatched to the Pacific but saw no combat action. Involved in combat, however, were the eleven ammunition and fifty-one depot companies trained at Montford Point. The 51st Battalion Band, led by musician Bobby Troup, lent to the sense of esprit de corps.

A total of 19,168 black Marines served in World War II, all of those in units trained at the sub-camp of Camp Lejeune. Navy Secretary Francis Matthews on June 23, 1949 ordered the end of racial division within the Navy and Marines. An era ended at Montford Point. Veterans of the installation in 1965 formed the Montford Point Marine Association that today has twenty-three chapters. One veteran has described his Marine experience as one of “pride mixed with bitterness.” Two years after the death of Sergeant Johnson (at a testimonial dinner of the MPMA in Jacksonville), the Marine Corps renamed the installation Camp Johnson in his honor.

Henry I. Shaw and Ralph W. Donnelly, Blacks in the Marine Corps (1975)

Bernard C. Nalty, Strength for the Fight: A History of Black Americans in the Military (1986)