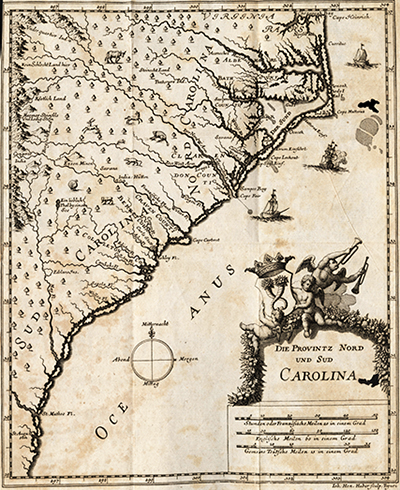 The province of Carolina given by England's King Charles II to the Lords Proprietors in 1663 and 1665 constituted a single grant. In 1664 the northeastern portion of the province, at that time the only part settled by Europeans, became the county of Albemarle, and a few years later, in 1670, another colony was established at Charles Towne (now Charleston, S.C.) on the Ashley River. Separate governmental structures-governors, councils, assemblies, and courts-came into being for the two settlements, although technically the province of Carolina was a united entity with neither of its two colonies being considered superior to the other.

In 1691, in a halfhearted attempt to centralize authority in response to unrest in both settlements, the Lords Proprietors decreed that the governor of Carolina would reside in Charles Towne and appoint a deputy for the northern part of the colony. The practical effect of the measure was at best negligible. Although the innovation resulted in the chief executives of North Carolina being styled "deputy governor" as a result of the change, their subordination to the "governor" at Charles Towne seems to have been merely formal. In addition, the legislatures and courts of both parts of the province continued their separate and independent existences. In 1710, however, the Proprietors ceased naming a governor for all of Carolina, and in 1712 Edward Hyde took the oath as governor of "No. Carolina." Nevertheless, various formal documents issued by the Lords Proprietors well after 1712 continued to refer to the "Province of Carolina" as if it were an undivided unit, as well as to the "Province of North Carolina" and the "Province of South Carolina."