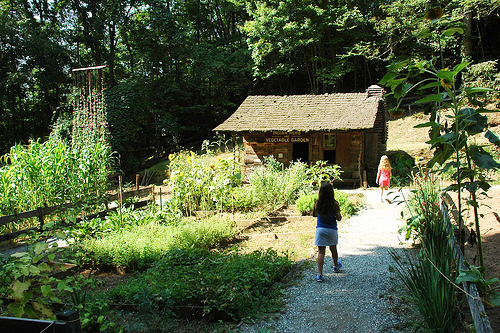 The Cherokee Botanical Garden, first opened to the public in May 1953, adjoins Oconaluftee Indian Village on the Cherokee Indian Reservation (Qualla Boundary) in western North Carolina. The garden is a project of the nonprofit Cherokee Historical Association, incorporated in 1948 to research and publicize the history and traditions of the Cherokee. Its other endeavors include Unto These Hills, an outdoor drama tracing Cherokee history produced each summer since 1950 in the Mountainside Theater. The association also owns the Museum of the Cherokee Indian, believed to house the most complete collection of Cherokee artifacts in existence. These artifacts, rescued from burial grounds and ancient campsites, date back some 10,000 years.

Along the half-mile nature trail of the Cherokee Botanical Garden are many of the flora of the Smoky Mountains, 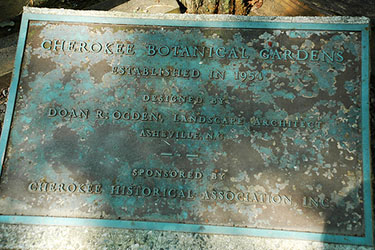 including rhododendrons, mountain laurel, bloodroot, jewel weed, squirrel corn, Dutchman's breeches, hepatica, wild white hydrangeas, asters, pink flowering raspberry, sunflowers, goldenrods, shad-bush, sassafras, tulip trees, and azaleas. Huckleberry, mountain ash, various sumacs, vegetables (Indian corn, pole beans, turnips, and others), zinnias, marigolds, and other plant varieties are included in the 150 species represented. Each is identified by its botanical and common names and grows in a spot that is well suited to its particular needs; many of the plants are growing where they were before the garden's inception. Care has been taken to disturb the natural growth as little as possible and to put new species and replacements in their natural habitats. Paths lead up and around mossy rocks, through which water trickles slowly downward.