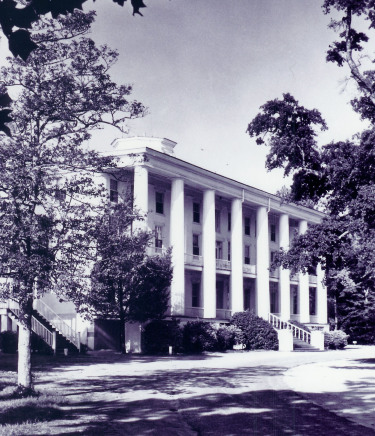 Chowan College, a four-year institution affiliated with the Baptist State Convention of North Carolina, is located in Murfreesboro in the northeastern part of the state. The college traces its origins to the May 1848 Chowan Baptist Association Meeting, where Baptist deacon and physician Godwin Cotton Moore of Hertford County, along with A. J. Askew, William Watson Mitchell, A. J. Perry, and S. J. Wheeler, recommended that a regional school for girls be created. On 11 Oct. 1848, Chowan Female Institute opened with 11 students. First situated in the old Banks School Building in Murfreesboro, the school changed its name in 1850 to Chowan Female Collegiate Institute and occupied the $30,000 McDowell Columns (the present administration building). The curriculum included algebra, arithmetic, astronomy, botany, drawing, English composition and grammar, French, geography, guitar, history, Latin, logic, "natural and moral philosophy," needlework, painting, and piano; tuition was $113 for five months. During the Civil War, the institute remained open with 81 students.

The school was renamed Chowan College in 1910 and, by this time, was granting B.A. and B.S. degrees; in 1925 the school received state accreditation as a senior college, as well as a $13,750 endowment from the North Carolina Baptist Convention. In 1927 the college was able to raise $25,000 to match a gift offered the previous year by tobacco magnate Benjamin N. Duke. In 1931, after a failed attempt at merging with Meredith College in Raleigh, Chowan began admitting men. The travails of the Great Depression forced Chowan to retrench to two-year status in 1937, and from 1943 through 1949 the college was closed.

In 1949 Chowan College reopened as a coeducational two-year institution. The school provided liberal arts education on the junior college level for the next four decades. New curricular offerings included secretarial courses (1949), graphic arts (1952), and a short-lived agriculture and mechanics curriculum (1953).

Throughout the 1980s the faculty and trustees debated the merits of transforming Chowan into a four-year school. Initially, the board refused to sanction this change, but in 1992 the college again began offering baccalaureate programs and awarded bachelor's degrees in 1994. In the early 2000s Chowan had approximately 750 full-time students served by 82 faculty members.

Herman W. Gatewood and R. Hargus Taylor, eds., Through the Years: A Pictorial History, Issued in Observance of the 125th Academic Year in the Life of Chowan College, Murfreesboro, North Carolina (1972).