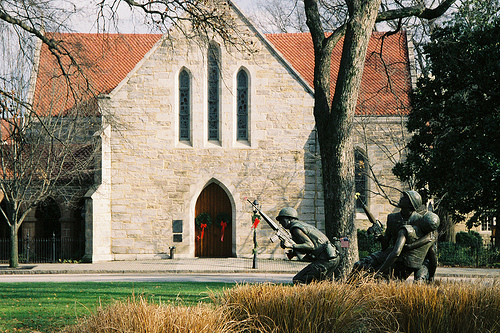 The Christ Episcopal Church, a handsome yet unassuming Gothic Revival-style stone church standing at the eastern edge of Capitol Square in Raleigh, enjoys landmark status in both the architectural history of North Carolina and the history of Episcopal Church architecture. Erected between 1848 and 1852 and consecrated on 5 Jan. 1854, the church is the second building raised as a house of worship for Raleigh's first Episcopal congregation. Since its organization in 1821, Christ Church Parish has shared the fortunes of the city through both the character of its congregation and its location at the geographic center of state government. In 1826, when the congregation set about erecting its first church, it turned to the English-born architect William Nichols, who had completed a remodeling of the statehouse in 1824.

For the church that would be a companion landmark to the State Capitol, the congregation of Christ Church turned to the leading New York-based architect, Richard Upjohn (1802-78). In a letter of 12 Jan. 1846, Bishop Levi Silliman Ives of the Episcopal Diocese of North Carolina approached Upjohn for the design of a new building, "a neat Gothic Church edifice," to replace the small frame church standing in the shadow of the splendid new State Capitol. Upjohn completed the plans in the autumn of 1846, and Richard Mason, rector of Christ Church and chairman of its building committee, signed a contract on 7 June 1848 with James Puttick, Robert Findlater, and Justin Martindale for a church to be built of locally quarried granite. The tower, a part of the original plan, was undertaken separately in about 1859 and completed in 1861. Fifty years later, in 1911, the congregation of Christ Church approached Upjohn's grandson, Hobart Brown Upjohn, for the design of a parish house. Completed in 1914 and linked to the antebellum church by an arched cloister, the parish house shares with the church a remarkable and unique physical, stylistic, and familial relationship.

Along with Thomas U. Walter's St. James Church in Wilmington (1840), Christ Church firmly established the Gothic Revival as the favored style for Episcopal churches in North Carolina, serving as the prototype for a succession of important cross-plan churches until the mid-twentieth century. In addition to this distinction, and that of having introduced the cruciform plan in its design, Christ Church became the first of a trio of churches designed by Richard Upjohn to be built in North Carolina, the other two being the chapel at St. Mary's School in Raleigh and Grace Church in Plymouth. These three churches-the first erected in stone, the second in board-and-batten sheathed frame construction, and the third in brick-represent the possibilities of Gothic Revival church architecture in mid-nineteenth-century North Carolina and served as models for a succession of later buildings. Of the three, Christ Church continues to evoke a much-deserved admiration and no little envy for its spare elegance and unpretentious beauty.