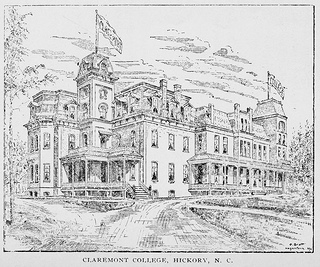 Claremont College, founded in Hickory in 1880 as Claremont Female College, was intended to be for young women what Catawba College represented for young men-a school within the Reformed Church's tradition of support for higher education. In 1907 Claremont was accepted by the North Carolina Classis of the Reformed Church in the United States. The school's named was changed to Claremont College in 1909. The institution never achieved financial stability, however, and it closed in 1915. Claremont High School remains on the site of the college.