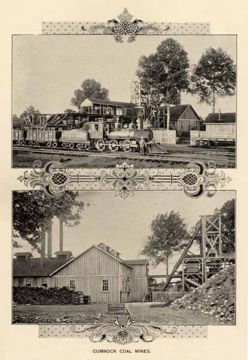 Coal in North Carolina is limited to two belts of Triassic sediment: the sporadic Dan River belt and the larger Deep River belt, which runs along the Deep River in Lee, Moore, and Chatham Counties. Metamorphosed from deposits of vegetable matter into hard, long-burning fuel, coal was utilized in forges in the Carolina colony before the American Revolution. During that war, coal from the Horton Mine, near Cumnock, was used by John Wilcox, who operated an ironworks at Gulf in Chatham County.

The Deep River coalfield is the only area in the state known to contain beds of commercial significance. Approximately 35 miles long and between 5 and 10 miles wide, the field contains medium volatile bituminous coal and is centered around 10 miles northwest of Sanford in the Cumnock Formation. Although the Egypt and Coal Glen Mines, using deep shafts and served by two rail lines-the Cape Fear & Yadkin Valley Railway at Cumnock and the Seaboard Air Line at Colon (by means of the Raleigh & Western Railway)-produced coal from this seam only intermittently from 1854 to 1953, significant periods of operation did occur. Because of the Civil War, production, especially from the Egypt Mine (in present-day Lee County), was extremely important, as coal was supplied to the Confederate arsenal in Fayetteville and the Charlotte Navy Yard; though it was often used by

Coal production retained the war's boost until 1873; other noteworthy periods were 1889-1905 and 1918-30, both mines operating during the latter interval. Although Coal Glen Mine produced about 14,000 tons of coal in 1949, averaging 100 tons per day, production on the Deep River seam ceased in 1953 because of the depth and the many dissecting faults that broke up the field. For these reasons, the area has proven to be uneconomical to mine, even though reserves are estimated to be 110 million tons.

Charles Wilkes, Report on the Examination of the Deep River District, North Carolina (1859).