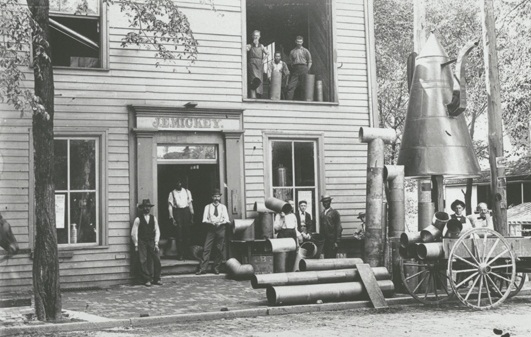 In 1859 Julius Mickey advertised his tin shop in Old Salem (part of modern Winston-Salem) by placing a large tin coffee pot on a pole in front of his business at the corner of Belews and South Main Streets. This extraordinary coffee pot measured 7 feet 3 inches from top to bottom, 2 feet 3 inches in diameter at the top, and 5 feet 4 inches in diameter at the bottom, with a capacity of approximately 740½ gallons.

The coffee pot remained intact, despite neighborhood youths' knocking it off its pole during many Halloweens, until the construction of Interstate 40 forced its removal. For several years William N. and Eugene Vogler stored the pot. By 1960 officials of Old Salem wanted to display the coffee pot, but the Voglers and the town could not agree on a location. In 1962 James A. Gray suggested placing it on a small grassy island of land formed where Brookstown Avenue joins South Main Street. The coffee pot stands today on a concrete pole, no longer the object of Halloween pranks.

Tradition maintains that a Confederate soldier hid inside the Salem coffee pot to escape from Union soldiers. This possibly occurred in April 1865, when a band of Stoneman's Brigade under Gen. W. J. Palmer came through the town.