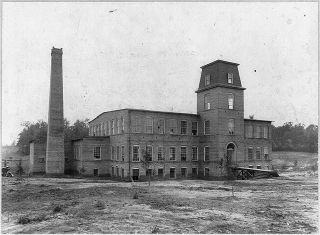 The Coleman Manufacturing Company in Concord was the first black-owned cotton mill in the United States. Warren C. Coleman was born a slave in Cabarrus County on 25 Mar. 1849. At the age of 18, only a few years after the abolition of slavery, he began a career as a merchant and businessman, investing early in real estate in Concord. By the 1890s, Coleman was the wealthiest African American in North Carolina. He turned his attention toward establishing a cotton mill that would break the color line that kept blacks from enjoying the economic benefits of mill employment. Beginning in 1896, Coleman lined up financing for the enterprise, and in February 1897 he announced the project to the public at the Cabarrus County Courthouse.

The cornerstone of the mill was laid on 8 Feb. 1898. Coleman had difficulty securing adequate capital, however, and the completion of the mill was delayed. Coleman Manufacturing finally began production in June 1901, but in 1902 the entire textile industry took a downturn, and the effects were felt severely by Coleman's fledgling enterprise. Further difficulties in 1903 led Coleman to resign his position as director in December of that year. Three months later, on 31 Mar. 1904, he died in Concord. The next month, Durham financier Benjamin N. Duke foreclosed on a $10,000 mortgage he held on the mill. He sold the property to Concord textile magnate James William Cannon in March 1906. The structure of the Coleman Manufacturing Company was operated for many years afterward as Cannon Plant Number Nine.

I bought a colman pool

I bought a colman pool 22ftx52in power steel from Wal-Mart and it is missing 2 of the box's.they said they can not get the rest of the box's. They said this pool was a special order for another customer and the pool was not supposed to be on display.

I came across a book on this

I came across a book on this subject back in 2016; flipped through it, considered buying it, set it down and then never saw it again on display. I regretted not buying it for the last three years, so I would have to say this article was quite helpful and informative.