Committee of One Hundred 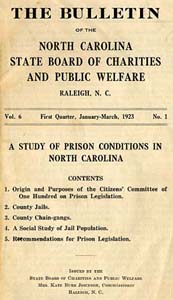 Between 1922 and 1926 the North Carolina Conference for Social Service devoted much attention to crime and prison conditions. A citizens' committee consisting of 100 people was composed to study these issues, largely through the efforts of A. W. McAlister of the Men's Club of the Church-by-the-Side-of-the-Road in Greensboro. A paper McAlister presented to the conference in 1922 produced a resolution to form the group. Known as the Citizens' Committee of One Hundred on Prison Legislation, it included Roy Brown and J. F. Steiner, both faculty members at the University of North Carolina in Chapel Hill and later coauthors of a study of chain gangs in North Carolina; Kate Burr Johnson, commissioner of public welfare; and George Ross Pou, superintendent of prisons.

The committee's various subgroups delivered their reports on 22 Nov. 1922. These reports were later drafted into policy proposals and were introduced as legislative measures in 1923. Three of the bills passed that year abolished the criminally insane division at the state prison, established a colony for tuberculosis prisoners, and placed the prison system under the state treasury. Although later proposals were also implemented, the committee ceased to exist after 1923.

Virginia W. Gulledge, The North Carolina Conference for Social Service: A Study of Its Development and Methods (1942).

"A Study of Prison Conditions in North Carolina." The Bulletin of the North Carolina State Board of Charities and Public Welfare 6. No. 1.  January-March 1923. https://docsouth.unc.edu/nc/prison1923/ (accessed October 18, 2012).