Drugstores, or apothecary shops, were scarce in eighteenth-century North Carolina. Solomon Halling and Henry Tooley advertised their New Bern shops in the North-Carolina Gazette in 1784 and 1793, respectively. Their ads listed drugs ranging from the innocuous (chamomile) or useful ("Peruvian bark," or cinchona bark, the source of quinine) to the toxic ("sugar of lead," mercury, and arsenic). They also sold spices such as cinnamon and cloves and patent medicines such as Godfrey's Cordials, Bateman's Drops, Stoughton's Bitters, and Daffy's Elixir. The Moravian settlement at Salem had an apothecary shop at least by the 1780s. 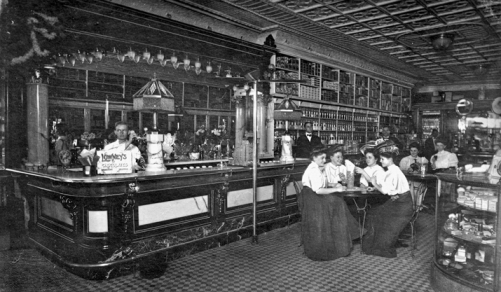 As late as 1851, there were only 17 drugstores in North Carolina, compared with 110 in Virginia. By 1875 the numbers had grown to include 9 in Wilmington; 6 in New Bern; 5 each in Charlotte and Greensboro; 4 in Raleigh; 3 in Fayetteville; and 1 in Durham. The Greensboro stores included W. C. Porter & Company, owned by the uncle of writer William Sydney Porter, better known as O. Henry. Young Porter was an apprentice druggist in his uncle's shop from 1879 to 1881. 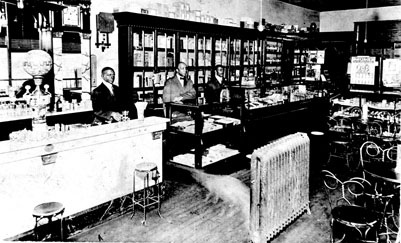 Established druggists, especially in the post-World War II years, faced competition from new "discount" or "cut-rate" stores as well as growing regional or national chains. By the start of the twenty-first century, North Carolina had more than 500 independent retail drugstores and nearly 1,000 chain stores, plus a few hundred more pharmacies in hospitals, clinics, nursing homes, and other facilities.

Kerr Drug, which began when Banks Kerr opened a drugstore in 1951 in Raleigh's Cameron Village, is the only drugstore chain based in the Carolinas. After being sold to JC Penney in 1995, the Kerr name and 154 stores were bought the following year by former Thrift Drug, Inc., executives. Florida-based Eckerd and Rhode Island-based CVS are among the major national chains with many stores in North Carolina.

Alice Noble, The School of Pharmacy of the University of North Carolina: A History (1961).

Waynesville Historical Society, A Heritage of Healing: The Medical History of Haywood County (1994).

I appreciate looking at your

I appreciate looking at your web sites. Thanks a lot!