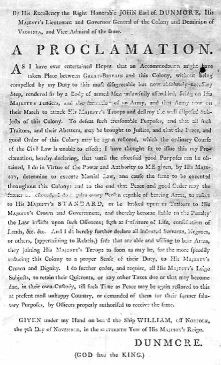 Dunmore's Ethiopian Regiment consisted of runaway slaves who served as English troops under the last royal governor of Virginia, Lord John Dunmore. In November 1775 Dunmore, who had wearied of tensions with the colony's ruling elite, offered freedom to Virginia slaves who would take up arms against the colonists. In short order, 300 runaways joined him and became known as "Dunmore's Ethiopian Regiment."

Concern over Dunmore's actions to free slaves spread into North Carolina, sparking the colony's first military engagement. Robert Howe led the 2nd Regiment of North Carolinians to Hampton Roads to assist the Virginia Continentals in repelling Dunmore's attacks on Norfolk area houses and plantations. En route, Dunmore's Loyalist troops, including the Ethiopian Regiment, attacked the colonials at Great Bridge, Va., on 9 Dec. 1775. Dunmore's troops lost the battle and were forced to evacuate to English warships in the port at Norfolk.

The British fleet sailed south from Norfolk and eventually anchored off the Cape Fear coast in early 1776. Once they learned of the English ship's arrival, North Carolina slaves began to desert their masters. Capt. George Martin, under Sir Henry Clinton, organized a North Carolina company called the "Black Pioneers," whose main duties were to relieve the British troops of the worst chores of military life: building fortifications, laundering clothes, cooking, and managing the horses and carts. The Black Pioneers also provided valuable intelligence on roads and waterways.

By the summer of 1776 Dunmore had disbanded his black troops and left southern waters, sailing for New York. In the end, few runaway slaves earned their freedom.