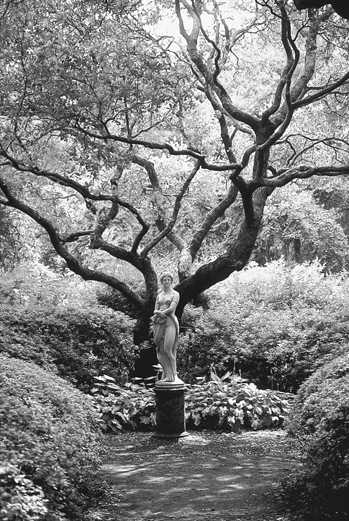 Elizabethan Gardens, adjoining the Fort Raleigh National Historic Site and the Waterside Theatre on Roanoke Island, are a memorial to the English colonists who settled on the island between 1585 and 1587. Conceived and developed as a project of the Garden Club of North Carolina, Inc., in 1951, the site is maintained as an authentic example of a sixteenth-century Elizabethan pleasure garden.

The idea for reproducing a garden of the Elizabethan Age evolved from a fortuitous meeting between renowned author Inglis Fletcher and Mrs. Charles A. Cannon, the founder of the Society for Preservation of Antiques. Some 500 garden clubs with 15,000 members across North Carolina accepted the challenge in 1951 and worked diligently to make the vision a reality. A ten-acre wilderness park on the island shore was donated by the Roanoke Island Historical Association to the state garden club for the garden site.

From the outset, the project benefited from the planning and expertise of two of America's foremost landscape architects, M. Umberto Innocenti and Richard Webel. Actual construction commenced on the day of Elizabeth II's coronation as queen of England. Four years of work culminated in the formal dedication of the gardens on 18 Aug. 1955, the 368th birthday of Virginia Dare. The keynote speaker at the dedication ceremonies was educator Frank Porter Graham, and other speakers included Fletcher and playwright Paul Green. Two magnolia trees, representing "mother" England and "daughter" United States, were planted during the festivities.

Several acres of the Elizabethan Gardens have been developed into formal gardens, and the remaining acreage has been preserved in its natural state. The perforated wall enclosing the gardens is constructed of handmade brick salvaged from old structures ranging from churches to tobacco flues throughout North Carolina. The ivy-covered Great Gate once adorned the French Embassy in Washington, D.C. Growing within the garden is a rose bush contributed by Queen Elizabeth II from the Royal Gardens at Windsor Castle. Near the wildflower garden an ancient live oak, believed to have been living when the first Roanoke colonists arrived in 1585, shades the winding path. Numerous pieces of statuary are located throughout the gardens. Of particular interest are the Virginia Dare statue, a gift of Paul Green, and the ancient pool and fountain, which were originally intended as a gift to the Metropolitan Museum of Art by John Hay Whitney, the former U.S. ambassador to Great Britain.

Selected as the most outstanding garden club project in the United States in 1961, the Elizabethan Gardens attracts more than 70,000 visitors annually and hosts historical celebrations, educational workshops, and theater and musical performances. Special events are regularly held, such as the one-woman show Elizabeth R and various programs marking the anniversary of the birth of Virginia Dare.