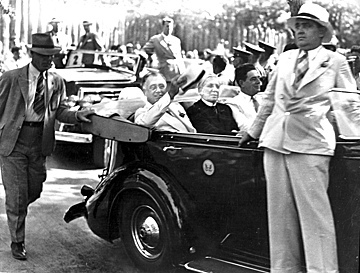 The Fort Raleigh National HistoricSite, located three miles from Manteo on the north end of Roanoke Island, preserves all the known sites and remains of Sir Walter Raleigh's Roanoke colonies (1584-90), the first English attempts to settle the New World. The Fort Raleigh site is also believed to contain the remains of a Roanoke Indian village, the 1862 Civil War battle of Roanoke Island, a Civil War-era freedmen's colony, the early radio experiments by Reginald Fessenden, and work associated with the nineteenth-century development of North Carolina's state boat, the shad boat. The grounds are also home to the Roanoke Island Historical Association's annual Waterside Theater production of Paul Green's The Lost Colony and the Garden Clubs of North Carolina's Elizabethan Gardens.

The Roanoke Colony Memorial Association (predecessor to the present Historical Association) bought and preserved the 16-acre nucleus of the site in 1895. It had previously been protected by the owners of the property, the Dough family. The Doughs farmed and built shadboats near the traditional colony site but did not farm the "fort tract" itself. After purchase by the Memorial Association, the area was marked and soon became the site of increased visits by the public and commemorative events. In the 1920s a silent motion picture about the Raleigh colonies was made there. In the 1930s a conjectural fort and town were constructed and the outdoor drama The Lost Colony was first performed. In April 1941 the property was transferred to the U.S. National Park Service.

Archaeological excavations under J. C. Harrington after World War II resulted in the reconstruction in the 1950s of an earthwork fort identified as Ralph Lane's 1585 "New Fort in Virginia." The site was expanded to 122 acres and a handsome, modern visitors center was built in the 1960s. Much of this development was funded by North Carolinians Fred and Emma Neal Morrison. The park also became the headquarters of the National Park Service's Cape Hatteras Group, which includes the Cape Hatteras National Seashore and the Wright Brothers National Memorial at Kill Devil Hills.

Continued archaeological research in 1966 by Harrington and in the early 1980s by John Ehrenhard of the National Park Service led to excavations in the 1990s directed by Ivor Noel Hume. These excavations revealed the remains of what has been called America's first science center-the workshop of Elizabethans Thomas Harriot and Joachim Gans, who as members of Ralph Lane's 1585-86 colony attempted to assess the natural resources of Raleigh's Virginia. However, these excavations have consequently put in doubt the dating of the earthwork fort to 1585.

In addition to walking trails of the traditional colony site and a Thomas Harriot Nature Trail through the maritime forest, Fort Raleigh's visitors center houses museum exhibits on the region's history and archaeology, a historical film based on the PBS production Roanoak, and the oak paneling from an Elizabethan Room removed from Heronden Hall in Kent, England.

(L-R) President Franklin D. Roosevelt riding in open car with Governor Clyde Hoey and Congressman Lindsay C. Warren at the entrance to rebuilt Fort Raleigh, Manteo, NC, on or just before August 18, 1937, when he came to see the Lost Colony. From the State Archives of North Carolina, call #: ConDev57-314. Available from https://www.flickr.com/photos/north-carolina-state-archives/6145095914/ (accessed September 20, 2012).