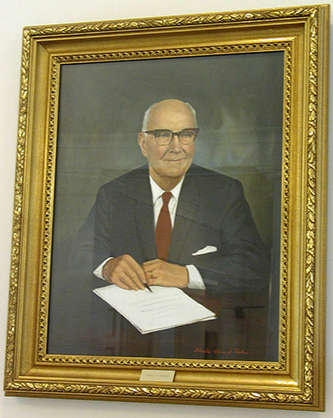 Charles Albert Cannon, textile manufacturer, was born in Concord, one of ten children and the youngest of six sons born to James William Cannon, who founded Cannon Mills, and Mary Ella Bost Cannon.

At nineteen, Cannon quit school to enter the textile business, which held a lasting fascination for him. He became manager of the family-owned Barringer Manufacturing Company in Rockwell. He became Cannon Manufacturing Company's vice-president in 1916, and president of Cannon Mills in 1921, upon his father's death. Two years later he was named head of Cannon Mills, Inc., the company's New York selling agent.

Cannon was a textile marketing pioneer. His innovations included national consumer advertising, an individual trademark sewn on each towel and sheet, pastel colors, use of clear plastic wrappings for each product, matching towel ensembles, and trade style shows. Cannon Mills's product line was expanded to include sheets, hosiery, bedspreads, draperies, decorative fabrics, and blankets. Sales at the time of Cannon's death exceeded $305 million. His company dominated over 50 percent of the nation's towel business and over 20 percent of the sheet business. In these areas, Cannon Mills were "the professionals in the white goods business."

Cannon Mills were vertically integrated, all the way from raw cotton to the final product. Nearly all of the seventeen plants were located within a twenty-five-mile radius, and the company was totally dominated by Cannon. "Mr. Charlie," as he was affectionately called, was publicity shy but was nonetheless a vigorous business leader, a courtly competitor, a benevolent textile baron, and a community autocrat.

Kannapolis, which Cannon envisioned as a model mill town in the architectural image of Colonial Williamsburg, is the nation's largest unincorporated town (population over thirty-six thousand). Cannon politically dominated both "his" city and Cabarrus County. He served on the state highway and public works commissions and the state parks commission. In 1965, Duke University conferred a LL.D. on him. While he was a most inconspicuous man, he was generous to medical and educational causes, aiding Cabarrus Memorial Hospital, which he served as board chairman, and a memorial hospital at Banner Elk, named in honor of his son, Charles A., Jr., who died in World War II.

Cannon married Ruth Louise Coltrane, the daughter of a Concord banker, on 5 June 1912. She died in 1965 after a long illness. They had four children: Charles A., Jr., William C., Marian, and Mary Ruth. By the time of his death, Cannon had built a remarkably stable textile empire of nearly $250 million in equity without a single dollar of long-term debt.