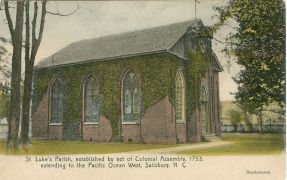 The Episcopal School for Boys (Salisbury) was the third attempt by the Episcopal dioceses of North Carolina to locate a boys' academy within the state. The effort was spearheaded by the Reverend Francis J. Murdock of St. Luke's Church in Salisbury, who sought support from the religious community of western North Carolina at large. It was his dream to help educate youth, particularly those ministerial candidates unable to pay for a quality Christian instruction. To this end and in addition to his regular duties as rector of St. Luke's, he served as a teacher, a fund-raiser, and the treasurer for the Episcopal School in Salisbury.

The institution opened in 1891 with 30 pupils. Enrollment remained constant, between 30 and 40, but funding for the small academy was precarious from the beginning; this problem, together with improvements in the local public school system, forced the Episcopal School to close after only eight years.