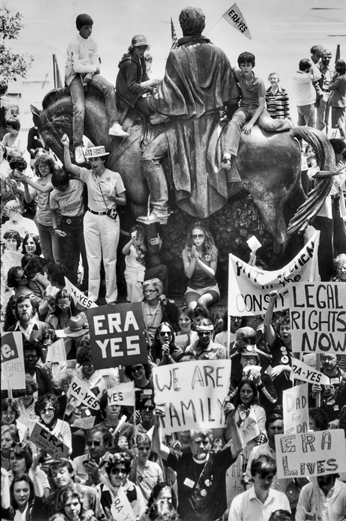 The Equal Rights Amendment (ERA), the proposed Twenty-seventh Amendment to the U.S. Constitution prohibiting gender discrimination, was passed by Congress on 22 Mar. 1972 and then forwarded to the states for ratification. Before the end of the year, the ERA was ratified by 22 states, but in several states, including North Carolina, disagreement over the amendment's implications led to many years of highly charged debate.

With North Carolina's Republican governor James E. Holshouser Jr. and Democratic lieutenant governor James B. Hunt Jr. initially voicing their approval of the ERA, several organizations were formed in the state to support or oppose the amendment. In January 1973, 1,000 ERA backers gathered at Duke University in Durham to launch North Carolinians United for ERA; Martha McKay of the North Carolina Women's Political Caucus was a major organizer of the event. Opponents in the ERA debate were led by U.S. Democratic senator Sam J. Ervin Jr., who, after being approached by conservative activist Phyllis Schlafly of Illinois, allowed Schlafly's Stop-ERA group to use his name in its mailings. Schlafly recruited Dorothy "Dot" Malone Slade of Reidsville, a member of the John Birch Society and the National Federation of Republican Women, to lead the statewide organization, North Carolinians against ERA.

After the ERA was formally introduced into the North Carolina legislature in February 1973, many proponents were surprised by the opposition's forceful arguments that outlawing gender discrimination would have detrimental consequences. Robert E. Lee, a Wake Forest University law professor, told the Senate Constitutional Amendments Committee that the simple text of the ERA would be open to interpretation by judges, inviting what he viewed as increasing court interference in public life. Perhaps most unsettling to proponents was the organized opposition from conservative women who 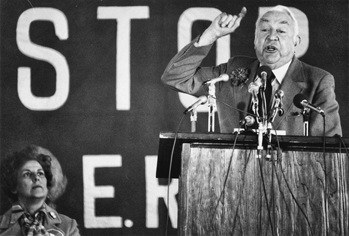 feared that civil society would fall into chaos if the amendment passed. While ERA supporters concentrated their efforts on lobbying the General Assembly, opponents were more successful in reaching out to North Carolina women and fueling concerns that the rights and privileges they currently enjoyed, such as maternity leave and basic courtesies, would be eliminated by the ERA. Although they may have lacked the political expertise of ERA supporters, anti-ERA activists found champions in Ervin and North Carolina Supreme Court justice Susie Marshall Sharp, a highly respected Democrat who publicly agreed with Ervin's opposition and made personal calls to legislators.

In 1973 the ERA was defeated in the State Senate by a vote of 27 to 23; it failed again in 1975. The amendment came close to passage in 1977, when Hunt became governor and it sailed through the State House by a vote of 61 to 55. This development prompted 1,500 opponents to stage a rally at Dorton Arena in Raleigh a week before the scheduled Senate vote; the gathering, at which Schlafly and Ervin spoke, was described by one observer as "a cross between a political rally and a church revival." Opponents found success in lobbying senators, and the ERA was again defeated in the Senate by a vote of 26 to 24.

In 1978, as the expiration date for the ERA neared without ratification from the required 38 states, Congress proposed an extension of the consideration period to 1982. Ervin's successor in the U.S. Senate, ERA backer Robert B. Morgan, maintained that an extension should in fairness also provide for a right to rescind, although his proposal was not accepted. Even though the extension was granted, the ERA failed again in the North Carolina legislature in 1979, 1981, and 1982 before it was ultimately rejected nationally.

Margaret A. Blanchard, Woman's Suffrage, the Equal Rights Amendment, Equal Pay for Equal Work, and Other Such Revolutionary Ideas (1974).

Howard F. Twiggs, ed., Before and After the Equal Rights Amendment: The Current Status of Women and the Expected Effects of ERA Ratification in North Carolina (1975).

This article needs to be updated as the fight for the ERA continues. 2 states have passed bills to ratify the ERA with only one remaining. There are legal arguments to throughout the time limit on the amendment and bills in the US Congress to remove or extend the deadline.