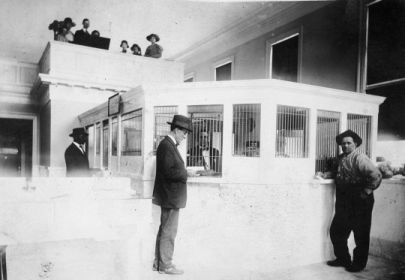 The First Citizens Bank & Trust Company began as the Bank of Smithfield, organized in 1898 as Johnston County's first bank and a precursor to the establishment of the Smithfield tobacco market. Founder Allen K. Smith served as president from 1898 until 1906, when Willis Lester ("Less") Woodall assumed the presidency. Under Woodall, the Bank of Smithfield became the First National Bank of Smithfield and was granted membership in the federal reserve system.

Soaring cotton and tobacco prices during and immediately following World War I gave rise to unprecedented growth, and by mid-1919 First National's total assets were over $800,000, with capital stock raised to $100,000. A 1921 merger with Citizens National Bank resulted in the bank taking on another new name, First and Citizens National Bank, which in 1929 was changed to First Citizens Bank & Trust Company. Robert Powell Holding, a Wake Forest native and recent law school graduate, had joined the bank in 1918 as an assistant cashier and was soon promoted to cashier. Considered a financial wizard, Holding succeeded Thomas Ruffin Hood as president in 1935. He continued to enlarge the scope of the bank's operations through the Great Depression, World War II, and the postwar years, building First Citizens into North Carolina's second-largest bank, with more that $200 million in assets and 45 branches serving 31 communities.

Holding's three sons took charge of their father's legacy after his death in 1957. Robert P. Holding Jr. became chairman of the board, Lewis R. Holding became president, and Frank B. Holding became vice president. Within a decade they had further expanded the bank to 114 offices in 51 towns. First Citizens remains one of the largest family-controlled banks in the United States, with a third generation of Holdings in leadership positions. With its headquarters in Raleigh, First Citizens by 2006 had more than 340 branch offices in North Carolina, Virginia, Tennessee, Maryland, and West Virginia, with assets of more than $14 billion.