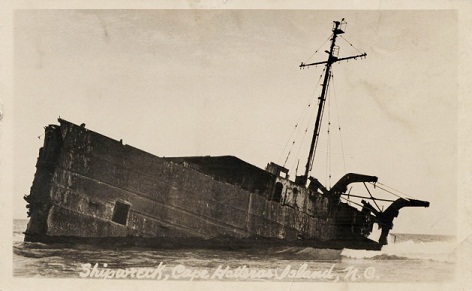 "Graveyard of the Atlantic" refers to the Atlantic Ocean waters along the North Carolina coast, which have been the scene of an unusually large number of shipwrecks. The warm waters of the northbound Gulf Stream meet the cold waters of the Arctic Current off Cape Hatteras at Diamond Shoals, and the entire coast is an area of shifting inlets, bays, and capes, representing a shipping hazard for both coastal and transatlantic vessels.

Remnants of some of the lost vessels are still visible to those on shore; many more are buried in the ever-shifting sands beyond the breakers. They include a fleet of Spanish treasure ships, returning to Europe after successful raids in the Caribbean in 1750 only to encounter a hurricane and end up strewn along the North Carolina coast. There is the coastal steamer Pulaski, lost on the Charleston-to-Baltimore run when it wrecked on the beach at Ocracoke in 1838 with the loss of 100 passengers and crewmen. Among other notable remains are those of sleek Civil War blockade-runners that failed in their effort to sneak into the Cape Fear River under the cover of darkness; the little ironclad Monitor, the "cheesebox on a raft," sunk off Cape Hatteras while being towed south following her famous battle with the Merrimac; and the United States gunboat Huron, run aground at Nags Head through navigational error, with the count of lost crewmen reaching 103.

There have been many other recorded shipwrecks in North Carolina's Graveyard of the Atlantic. Modern underwater searching equipment has brought the current estimate to the neighborhood of 2,000. They range from the tanker Mirlo, lost off Chicamacomico in 1918 after hitting a German mine, to larger tankers-a total of more than two dozen of them-sunk by Nazi submarines in 1942, including six in the course of one terrible day and night within sight of Cape Hatteras. A large number of doomed ships in the days of sail were schooners, but there was a fair sampling of everything from barks, brigs, and brigantines to a clipper ship and a pilot boat. Among the more modern craft lost were freighters, trawlers, barges, lightships, and even two battleships sunk by aircraft off Cape Hatteras to prove Gen. Billy Mitchell's claim that airpower would be an important part of future warfare.

Despite the widespread publicity given to North Carolina's deadly coastline, it has competition. The shoreline of Sable Island, off Nova Scotia, is so littered with shipwrecks that it, too, has earned the name "Graveyard of the Atlantic."

We love the outer banks, have

We love the outer banks, have been going there for about 30 plus years,,too bad they cut the area of beach you can travel on, don't mind paying a fee for a permit, because it helps maintenance costs, but then to restrict so much beach, is a shame