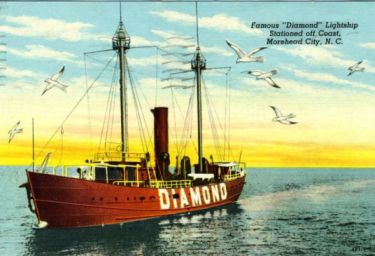 Lightships, beginning in the early nineteenth century, were anchored off the North Carolina coast to alert seagoing vessels to the proximity of hazards. Designed to supplement lighthouses and mark sandbars and channels, these ungraceful but sturdy ships were placed in locations that could not be marked with fixed structures. Ships and crews remained on station in all weather conditions, warning sailors of treacherous waters. Operation of lightships was overseen by the U.S. Treasury Department until 1852, when the Lighthouse Board assumed control. The U.S. Lighthouse Service replaced the Lighthouse Board in 1910 and was superseded by the U.S. Coast Guard in 1939.

Lightships had official designations such as " LV," " WAL," or " WVL" and were numbered sequentially according to the order of their construction, though when on duty each ship temporarily received the name of the hazardous region it protected. Vessels could be identified by color codes, lights, foghorn and radio signals, and large letters painted on their sides. These ships were built to sustain the severe pounding of the fierce storms and agitated waters of North Carolina's most feared shoals. Although some were sunk by weather and others by collision or Civil War engagements, most of the craft and their crews survived.

Many channels and shoals marked by the lightships gradually moved, and the need for these vessels subsequently diminished. Diamond Shoal and Frying Pan Shoal lightships were replaced by Texas-type light towers, and other areas were marked by buoys or fixed lights. These and other forms of technology eliminated the usefulness of lightships, and by the end of the twentieth century none were operating in North Carolina waters.

Lightships in the US, National Park Service: https://www.nps.gov/maritime/ltshipnhltheme.htm

Hi,
I found a black & white photo of Cape Lookout Lightship.
Do you have any information on the colors of that Lightship?
'm working on a stain glass stepping stone for my personal use. I need the colors to represent that ship.
Thanks,
Betsy

Thanks for visiting NCpedia and asking this excellent question!  And what a great project!

According to the "Lightships of the United States Government" by Willard Flint, printed by the Coast Guard Historian's Office for the Coast Guard bicentenntal in 1989, the Cape Lookout Shoals Lightship had a yellow hull with red ends and the markings were in black.  The resource has been digitized and is available on Internet Archive and the page with the information on the ship is at https://archive.org/stream/lightshipsofunit00flin#page/n457/mode/2up/search/%22cape+lookout%22.