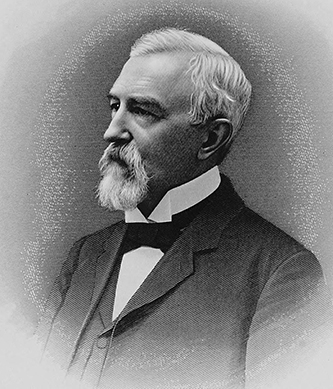 Thomas Jefferson Hadley IV, captain, banker, and businessman, was born in Wayne County on July 9, 1838 to Thomas Jefferson Hadley III, a wealthy farmer, and his wife, Millicent Richardson. He was the sixth of eight children. Being born into a well-respected as well as politically and socially prominent family gave Thomas Hadley many advantages, one of which was the opportunity to attend the University of North Carolina.

Thomas Hadley entered the army as a private in a platoon of Wilson County men. Hadley garnered some attention, and was soon promoted to First Sergeant on June 2, 1862, and to Third Lieutenant on June 9,1862. The Wilson County platoon was subsequently involved in multiple battles, including the Battle of Gettysburg. During the attack known as Pickett’s Charge, Thomas Hadley was said to have gone “farthest to the front,” and although he survived this battle, he lost many soldiers.

In 1864, Hadley was wounded during the Battle of the Wilderness, and was unable to fight for several weeks. Despite this setback, he returned to the army with a promotion to the position of Captain, giving him command of the platoon. At the battle of Globe Tavern in August 1864, Hadley was captured and “imprisoned at the infamous Union prison, Fort Delaware where he managed to survive until his release on June 17, 1865, after taking the Oath of Allegiance.”

After the war, Hadley returned home to Wilson, and went back to school at the University of North Carolina, where he earned a Master of Arts and completed a law course. Upon completion of his masters’ degree, Hadley taught for a year before venturing into the field of business and, eventually, the familiar trade of farming.

Thomas Hadley’s success in the business world opened up endless opportunities for investments. Alpheus Branch, who had “established a small mercantile business called Branch and Company,” became acquainted with Hadley, who, at the time, “was trying to organize the first system of public schools.” They teamed up in 1872 to create the banking institution Branch and Hadley.

Thomas Hadley and Alpheus Branch had a major impact on the economy after the Civil War. Many planters, farmers and freed slaves were left with very little after the economic crash that followed the Civil War. Hadley and Branch wanted their bank something that people could trust and believe in. Their main clients were people who used to own farms and small businesses, and needed financial help to get their businesses back up and running. “With a place to borrow money at reasonable interest to buy seed and fertilizer, area farmers planted their fields in cotton and in the early 1880s, experimented with a new crop, tobacco.” The creation of their bank was a turning point in the reconstruction period.

In 1887, after many years as partners, Branch bought Hadley’s shares of their bank for $81,000 and changed the name to Branch and Company, Bankers. Two years after Branch bought Hadley’s shares of the bank, a group of men--including Branch--secured a charter from the North Carolina Legislature to open the Wilson Banking and Trust Company. Later, the name was changed to Branch Banking and Trust Company, otherwise known as BB&T.

Hadley died in 1917 at the age of 79. He was predeceased by his wife, who passed away in 1903 at the age of 56. The Hadley line ceased with the death of Lucien Sanders Hadley in 1945. Though Hadley had two sons who survived to maturity, neither of them had children. His family is continued on through his daughter, Mattie, under the Woodard lineage.

So he and his partner Alpheus

So he and his partner Alpheus Branch, who are the founders of BB&T Bank, were slave owners, or at least profited from their families owning ( maybe trading in ) slavery. I've noticed this since visiting a local branch and viewing how many African-Americans bank there and probably don't know this fact. Another Black history Month gone to waste.